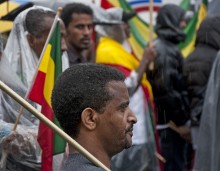 The U.S. has warned Ethiopian authorities not to use the newly imposed state of emergency to silence opposition voices. On Tuesday, US State Department spokesman John Kirby said that the Ethiopian government needed to explain how it intends to enforce… Read more ›

Ethiopian Protesters Kill US Researcher With Stones After Attacking Her Vehicle

Source: Inquisitr.com A UC Davis postdoctoral researcher has been murdered near Ethiopia’s capital Addis Ababa after anti-protesters attacked the vehicle she was riding in with stones. Sharon Gray, a 30-year-old researcher at the University of California’s plant biology department, died… Read more ›