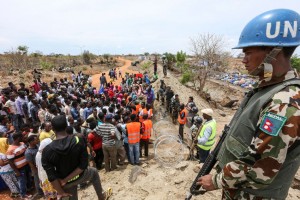 The United States has issued a stinging condemnation of alleged attacks by Sudan’s Rapid Support Forces (RSF) on civilians in Blue Nile and North Kordofan States.

According to Samantha Power, the U.S. Ambassador to the United Nations, in a statement to the press on Thursday, ground attacks and air raids by the military have increased since April.

The government’s forces have been accused of increasingly targeting civilian structures; including schools and hospitals.

Mrs. Power decried these attacks in the ‘strongest possible terms’ and called on both sides to cease all violence against civilians and respect international law.

She revealed that the rise in violence in North Kordofan and Blue Nile has led to the displacement of more than one million people.

Meanwhile, in Darfur, Mrs. Power noted that about 300,000 people are believed to have been displaced this year since the authorities adopted similar tactics used in other states (which includes blocking the rebel’s supply routes).

Reports indicate that up to 40% of the internally displaced civilians are at risk of experiencing a food crisis as fighting continues to disrupt farming.

Local sources say the rebels, made up of remnants of the Sudan People’s Liberation Movement (SPLM) and other groups formed by local non-Arab clans, have continued to mount an opposition on the battlefield despite the president’s vow to crush them by the end of this year.

Recently, the RSF pledged not to abate their attacks until the rebel capital in South Kordofan, Kauda, is reclaimed. RSF spokesman, Mohamed al-Nasir Abakar, told the state media that the coming rains will not stop the campaign. According to him, it is peace or death for the rebels.

The army has revealed that about 110 rebels were killed in clashes over the capital of South Kordofan, Al Atmoor, earlier this month. However, the rebels say the government side also suffered equal casualties.

Despite numerous calls for an end to the violence, both sides failed to conclude a framework agreement to end fighting and initiate peace talks last month.

About 45 peace and humanitarian groups have forwarded a letter to the United Nations Security Council, the African Union and the Arab League this week to demand an end to the violence.

According to them, the three-year conflict has escalated to unprecedented levels in the past few months; forcing civilians to flee, increasing their vulnerability to disease and disrupting the local planting cycle.

The groups also charged the army with bombing civilians structures; including a market, the premises of local humanitarian organizations and two schools.

Meanwhile, other groups have accused the RSF of looting and destroying food, water and other supplies in rebel-held areas.

The RDF has also come under criticism from many opposition figures. Since May, the government has arrested two top opposition politicians – former prime minister Sadiq al-Madhi of the Umma Party and Ibrahim al-Sheikh of the Sudanese Congress Party – for accusing the RSF of war crimes.

Last month, General Abbas Abdelaziz of the RDF told the press that his forces have neither looted not destroyed properties in any villages. According to him, this is the handwork of the rebels being passed under their name.