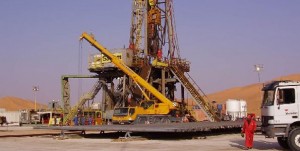 Kenya’s government is pushing licensed oil and gas explorers to speed up their work to meet the terms of their contracts. The government is threatening to invoke their right to cash in their guarantees if they fail to do so, a senior Kenyan Ministry of Energy official said.

A squeeze in global capital markets has hurt independent firms’ ability to raise money to drill exploratory wells, causing a handful of oil companies in Kenya to fall behind schedules they are contractually obliged to meet.

The government’s tough new stance could have major implications, pushing out smaller firms in favour of those with greater investment capacity.

“We just want them (explorers) to do their work. If they don’t do the work we cash the bank guarantee,” Martin Heya, Kenya’s petroleum commissioner, told Reuters.

Bank guarantees are usually agreed when companies sign exploration contracts, specifying an amount of money payable to the government should they fail to meet their obligations. The government can also revoke licences.

“Now the interest that is there (in Kenya’s resources) is so overwhelming. If you just sit on the block and do nothing we will take action,” Heya said.

John Malone, who studies the sub-Saharan African petroleum industry for New York-based Global Hunter Securities, said: “The market has had no interest in taking any risk, it’s made it harder for them to go to equity markets and raise money … that’s punished a lot of these smaller oil companies.”

Australian firm Lion Petroleum fell behind on its work commitments this year, causing the government to charge the company a $4 million fee to extend its contract by 12 months.

Newly-formed Canadian company Taipan Resources said it was acquiring the firm in July. It raised $11.5 million to cover the fee and meet Lion’s contractual obligations, including conducting surveys and drilling an exploratory well. Taipan Resources was unavailable for comment.

Other companies, such as Zarara Oil and Gas Resources, have also had difficulty meeting work schedules, according to the Ministry of Energy.

Peter Worthington, head of Zarara’s parent company Midway Resources, said the firm was unwilling to discuss the issue because of its contractual relationship with the government.

Heya said Zarara was working to catch up and the ministry was not planning any immediate action against the company.

He added that most other companies working in Kenya were on track to meet contract schedules.