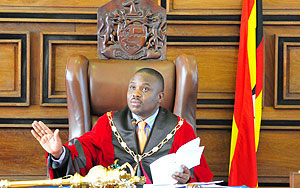 A court has ruled against the embattled incumbent mayor of Kampala, Erias Lukwago, from returning to his office at City Hall.

The acting deputy chief justice, Steven Kavumba, granted the application of attorney general Peter Nyombi, which challenged the decision of a High Court on Friday that allowed Lukwago to resume his role as Lord Mayor of the capital city.

The court also granted an interim order preventing the implementation of other rulings of the High Court in relation to this contentious trial.

In November 2013, the Minister of Kampala and Kampala Capital City Authority (KCCA) councillors voted to oust the Lord Mayor after a tribunal found him guilty of abuse of office.

Although judges are yet to rule on Lukwago’s petition challenging the credibility of the tribunal’s investigation which led to his impeachment, court decisions have seen him reinstated and removed from his post more than once.

In her ruling on Friday, Justice Lydia Mugambe, noted that the move to remove Lukwago from office is unlawful.

She also granted a permanent injunction against plans of the Electoral Commission (EC) to commence preparations for polling to select a replacement for Lukwago.

Earlier in the day, the Lord Mayor returned to his office amidst loud cheers from his supporters.

Lukwago told the press that he has no interest in hunting after his detractors and is committed to uniting and forging ahead.

Many pro-Lukwago commentators online have described the Court of Appeal’s ruling today as a step backwards in the fight for justice in Uganda.

Lukwago and many of his supporters have since accused the ruling National Resistance Movement (NRM) of conniving to eject the Lord Mayor and replace him with someone more sympathetic to the government.

Meanwhile, Adbul Katunte, the legal representative of Lukwago, has disclosed that the appeal court’s ruling will be challenged at the supreme court.