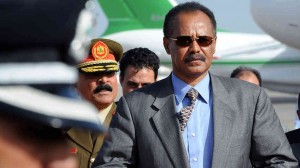 Eritrean officials have disclosed that the embattled country has no ties with the rebels behind the insurgency in South Sudan – headed by Riek Machar – contrary to the claims of numerous critics.

A statement from the office of President Isaias Afwerki described the accusations as “preposterous” and “outrageous” lies.

Eritrean officials have accused the nation’s long-time regional rival, Ethiopia, of being behind the latest wave of false charges.

Eritrea is currently facing sanctions over similar accusations of ties with al Shabab and other rebels in the region.

Yemane Gebremeskel, the Director of the Office of the Eritrean President, has commented that the false claims are intended to portray Eritrea as a destabilizing force in the region, thereby justifying the sanctions against it and play down the country’s border dispute with Ethiopia, according to a report by the Horn of Africa Media Group.

In February, John Prendergast of the United States lobby group, Enough, told a U.S. Congress Subcommittee on Africa that “allegations are increasing that both Eritrea and Sudan are covertly providing support to the South Sudanese opposition forces.”

However, he failed to provide any concrete connection between these nations and the rebels behind the three month-long insurrection in South Sudan, noting that “firm evidence has yet to emerge.”

Reports indicate that the Prime Minister of Ethiopia, Hailemariam Desalegn, was one of the first people to raise this accusation during an African Union summit in Ethiopia in January.

Several critics have called on the United Nations to investigate the claims and increase its sanctions on Eritrea – if necessary.

But observers say these accusations will come as a blow to the Eritrean government, who is reportedly planning on getting the UN to lift the sanctions against it as no evidence has been found to support any of the claims that attracted the sanctions.

Although the Eritrean government has also been accused of supporting rebels in Sudan and Ethiopia, Asmara continues to maintain diplomatic ties with these nations.

In January, President Isaias Afwerki voiced his support for the government of South Sudan over Machar’s rebels.

The relationship between Sudan and Eritrea goes as far back as Eritrea’s war for independence in the 60’s, according to experts.

The Eritrean government had reportedly supported the Sudan Liberation Movement/Army during its war with Khartoum, which eventually led to the formation of South Sudan in 2011.

Reports indicate that there are over 5,000 Eritreans currently in Juba and other states across South Sudan.

Many reportedly went there to escape the authoritarian regime in Eritrea, but have become trapped in the middle of the conflict.

During the early days of the insurrection, the Eritrean Embassy in South Sudan had announced plans of relocating some of its citizens in regions which were experiencing the most violence – Unity state and Bentiu.

Meanwhile, the warring parties in South Sudan are set to resume their talks in Addis Ababa today to chart a course out of the conflict.