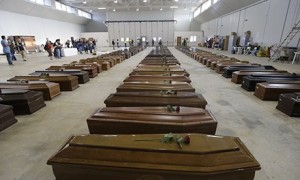 The government of Ethiopia has honored the victims of the boat tragedy, which occurred close to the Italian Lampedusa island in October.

Last week, the Ethiopian House of People’s Representatives decided the national flag would fly half-mast in commemoration of the victims of the accident.

Although this decision was made primarily to express solidarity with the affected families, it was also recognized as a act to commemorate all persons who have died while fleeing from the lack of fundamental civil, economic, and social rights in their countries of origin.

The decision came following the African Union’s declaration to proclaim a continental mourning day. In line with this decision, Ethiopia’s flag flew at half-mast yesterday. Every public gathering also observed a moment of silence for the victims of the tragedy.

In Addis Ababa, services were held at the ECA and AU Mosques on November 1st. Meanwhile, Member States were advised to fly their flags at half-mast yesterday. The Lampedusa tragedy occurred on October 3rd this year, when a boat carrying approximately 545 migrants mostly from Somalia, Eritrea, and Syria sank off the Lampedusa coast, an estimated 359 migrants are thought to have drowned.

The Mourning Day also served as a chance to reiterate Africa’s concern regarding the recurring preventable tragedies that affect human dignity, rights, and threaten peace, stability, and security. Furthermore, it calls for Africans to reflect on long-term solutions to the needless loss of youthful Africans who could help build a peaceful and prosperous future.

In spite of this tragedy, countless migrants still land on the island, which is renowned worldwide to be gloomy rather than hopeful. For years, Lampedusa has offered a backdrop for migrant landings. Lampedusa, which is close to Africa, is acquainted with human suffering and horrific tragedies.

The migrant landings have persisted for about two decades in spite of Italy’s stern immigration laws. According to statistics from the UNHCR, most migrants arriving on Italian shores this year are from Eritrea and Syria.

Meanwhile, Lampedusa is developing a new identity – that  of collective solidarity and compassion with the marginalized. Contrary to Italy’s immigration laws, the island appears to reflect a growing sense of peace. The Roman government has also initiated a military-humanitarian mission around the island.

The mission is supposed to enhance sea patrol while simultaneously urging the European Union (EU) to share the burden. On the same note, NGOs are eager to see authorities move past crisis management of the migrant arrivals and enhance the system for asylum-seekers.

The recent tragedy has resulted in further calls for the EU to act. Furthermore, Sicily’s governor has declared an emergency state due to the huge migrant numbers it has to deal with. The order will offer funds to aid workers assisting the migrants from Syria and Africa.

Similarly, the AU Commission has a commitment to advocate for human rights and global protection for every migrant irrespective of his or her status. The Commission will continue collaborating with member states, partners, and local economic communities in fostering migrants’ rights. According to Dr. Mustapha Kaloko-the Social Affairs Commissioner, the Commission cannot avoid the issue due to the degree of challenges they face.

Dr. Kaloko further added that they are working to enhance the capacity to manage migration. In spite of the imminent dangers and tragedies that occur in Lampedusa, countless migrants take the perilous journey in search of a better life for themselves and their families.