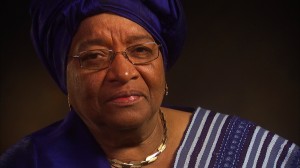 MONROVIA, Liberia (FoxNews) – Liberian President Ellen Johnson Sirleaf said Ebola has killed more than 2,000 people in her country and has brought it to “a standstill,” noting that Liberia and two other badly hit countries were already weakened by years of war.

Appealing for more international help, Sirleaf described the devastating effects of Ebola in a “Letter to the World” that was broadcast Sunday by the BBC.

“Across West Africa, a generation of young people risk being lost to an economic catastrophe as harvests are missed, markets are shut and borders are closed,” the Nobel Peace Prize laureate said. “The virus has been able to spread so rapidly because of the insufficient strength of the emergency, medical and military services that remain under-resourced.”

In neighboring Sierra Leone, emergency food rations were distributed for a third day Sunday to give a nutritional lifeline to 260,000 residents of an Ebola-stricken community on the outskirts of the capital, Freetown.

The Waterloo area has 350 houses under quarantine with people suspected of having the Ebola virus and infections in the district are rising, according to the U.N. World Food Program. Packets with food for 30 days were delivered to the quarantined homes and to Ebola patients at treatment centers.

The rest of Waterloo’s residents went to 60 distribution centers to receive the food supplies. The mass distribution, which started on Friday, for the most part went smoothly but was disrupted at two of the 60 distribution points by people pressing to get the food, said Gon Myers, WFP director in Sierra Leone.

The emergency food deliveries came as the international community ramps up its response to the Ebola epidemic in West Africa, which continues to spread.

The total death toll has risen to more than 4,500 people from the 9,000 infected, according to the World Health Organization. Although Senegal has been declared free of Ebola and Nigeria is expected to get the all clear, the epidemic remains out of control in Sierra Leone, Guinea and Liberia. WHO warns that by December there could be as many as 10,000 new infections per week.

Fourteen other West African countries have been identified as at risk and steps are being taken to prepare them, said Isabelle Nuttall, director of WHO’s global capacities.

The United Nations has established a regional headquarters for the response to Ebola in Accra, Ghana. The director of the World Health Organization Margaret Chan was scheduled to attend a meeting in Ghana but did not make any public appearances, cancelling a scheduled press conference Saturday. Chan and WHO have come under scrutiny following an internal document obtained by The Associated Press which said the U.N. health organization did not respond adequately to contain the Ebola outbreak in West Africa.

Sirleaf noted that the three hard-hit countries were already in bad shape when the first-ever outbreak of Ebola in West Africa began.

“There is no coincidence Ebola has taken hold in three fragile states — Liberia, Sierra Leone and Guinea — all battling to overcome the effects of interconnected wars,” Liberia’s leader said, adding that Liberia once had 3,000 medical doctors but by the end of its civil war, which ended 11 years ago, the country had just 36.

“This fight requires a commitment from every nation that has the capacity to help, whether that is with emergency funds, medical supplies or clinical expertise … It is the duty of all of us, as global citizens, to send a message that we will not leave millions of West Africans to fend for themselves against an enemy that they do not know, and against whom they have little defense,” Sirleaf said.

Showing the commitment of dedicated health workers, a British nurse who contracted Ebola while working in Sierra Leone returned to the country Sunday after treatment in London.

William Pooley is due to start work Monday at an Ebola isolation unit in Freetown, said King’s Health Partners, a project involving academics and medical staff.

Pooley, 29, was flown to Britain in August and cared for in a special isolation unit at the Royal Free Hospital, where he received the experimental drug ZMapp.

In a statement, he thanked everyone responsible for his care and added that “the real emergency is in West Africa, and the teams out there need all the support we can give them.”

Pooley said: “I am now looking forward to getting back out there and doing all I can to prevent as many unnecessary deaths as possible.”