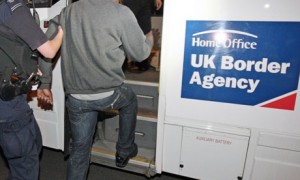 Six Ethiopians were arrested on suspicion of immigration offenses in Bulphan, East of England, on November 5.

The three men and three women, who were arrested yesterday morning, have since been transferred to immigration detention.

Essex Police were contacted at around 9.15am yesterday after several suspected illegal immigrants were inside the back of a lorry.

A spokeswoman said: “The lorry was parked at Dunnings Lane in Bulphan near Upminster.

“Six people have been taken into custody before being transferred to the care of Border Force.”

“Where someone is found to have no legal right to remain in the UK we will take action to remove them.”