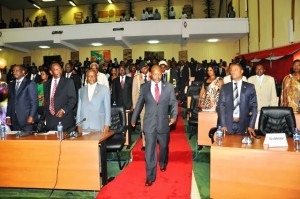 The United States has appealed to the Burundian government to drop its planned constitutional amendments which has been the source of political tension in the deeply divided nation.

On Tuesday, the United States Ambassador to the United Nations, Samantha Power, told journalists after a recent meeting with President Pierre Nkurunziza in Bujumbura that “As preparations continue for elections in May of next year, the United States is hopeful that a climate of internal stability, freedom, and peace will prevail.”

She further revealed that in the deliberations with President Nkurunziza, his tremendous role in steering Burundi from over a decade of war between its two main ethnic groups as highlighted, according to a report by Reuters.

Also on Tuesday, the United Nations Security Council voiced worries over the situation in Burundi after being briefed by Jeffrey Feltman, the UN under-Secretary for Political Affairs.

The French government has also cautioned Burundian authorities to avoid plunging the nation into another prolonged war.

Since President Pierre Nkurunziza disclosed his intentions of altering the 2005 constitution in December 2012, the nation has descended into a political crisis, with observers warning that the crisis could deteriorate into a civil war.

According to some pundits, the tipping point in the crisis was the dismissal of the Hutu-dominated Union for National Progress (UPRONA) Vice President, Bernard Busokoza, as well as the head of the party Charles Nditije, by the government earlier in the year. This eventually led to the resignation of three top ministers; Jean-Claude Ndihokubwayo, Minister for Communal Development, Leocadir Nihazi, Minister for Information, Telecommunication and Parliamentary Relations, and Victoire Ndikumana, the Minister for Posts, Commerce, Industry and Tourism.

While a section of UPRONA have described plans for the constitutional amendments and the government’s dismissal of the party’s chairman as an attempt to infiltrate and undermine it before the country’s 2015 elections. Other UPRONA members have sided with the actions of the ruling National Council for the Defense of Democracy-Forces for the Defense of Democracy (CNDD-FDD). This has reportedly resulted in an acrid dispute between the two factions and a virtual split of the party.

Meanwhile, other political parties and commentators in the country have voiced their disagreement with the planned amendments.

Although the Burundian president’s plans to alter the constitution and stay one more term in power has been rejected by the National Assembly after it failed to get the required number of votes last month, there are reports that the plan is still being forwarded.

Interior Minister, Edouard Nduwimana, has revealed that the amendments will be put to a referendum.

Last month, he was quoted warning other presidential candidates to “prepare themselves with the knowledge that as of today, the president will run, and it will be up to the constitutional court to settle the matter.”

Meanwhile, commentators in Burundi have alluded to the fact that the political turmoil is likely the result of the ruling CNDD-FDD attempting to stifle its opponents before the 2015 national elections.

Many have pointed to the suspension of the Movement for Solidarity and Development (MSD) following clashes with security officers last month as evidence of this nefarious plot.

The 2015 elections will be the third in Burundi’s history. The nation was thrown into a war in 1993 shortly after the election of Melchoir Ndadaye as the first president. This state of things persisted until 2005, when President Nkurunziza was voted by parliament to lead the nation. In 2010, in a much anticipated universal suffrage elections, virtually all the opposition parties pulled out due to alleged fraud by the government, leaving President Nkurunziza to win by over 90%.