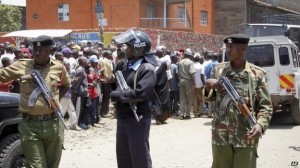 Since Saturday, Kenyan security agents have apprehended reportedly about 6,000 foreigners in Nairobi – mostly Somalis – in the wake of a spate of terrorist attacks linked to Somalia-based al Shabab.

Interior Cabinet Secretary, Ole Lenku, told the media, on Monday, that the suspects were taken into custody on suspicion on possessing fake identification documents.

He pinned the surge of terrorism in Kenya to migrants, adding that “The time has come for cleanup, mop-up and getting criminals outside our systems.”

According to him, the operation would extend from Nairobi to Mombasa and Nakuru.

On Tuesday, the United Nations High Commission for Refugees (UNHCR) expressed concerns for the condition of the detainees.

Reports indicate that due to the unprecedented number of suspects in custody, the police have had to convert the Kasarani Safaricom Stadium into a temporary holding facility.

After a recent visit to the stadium, the head of the Eastleigh Community Police, Mohammed Noor Ismail, told the press that there are little provisions for the welfare of the detainees.

Meanwhile, the UNHCR has condemned the decision of Kenyan security agents to bar humanitarian organizations from accessing the suspects.

The organization, however, entreated Kenya to “to uphold the rights of all those arrested and to treat them in a humane and non-discriminatory manner.”

The United States Ambassador to Kenya, Robert Godec, has relayed similar sentiments. In an interview with Capital FM today, he noted that “As the government does what it needs to do to secure the country, at the same time, the Constitution and the International law and commitments regarding human rights need to be respected.”

Meanwhile, Police spokesman, Masoud Mwinyi, has revealed that the directive to bar humanitarian organizations from the security zone came from the Inspector General of Police, David Kimaiyo.

He, however, revealed that up to 3,000 suspect have been screened thus-far and about 467 were detained, while 69 have been charged.

A police source has further disclosed that up to 1,600 of the detainees have been released after they were screened, according to ENCA.

Mohamed Ali Nur, Somalia’s Ambassador to Kenya has confirmed to the press that all the suspects with valid visas or legal refugee status have been released, according to Yahoo News.

In response to criticisms of the exercise, the Inspector General of Police, David Kimaiyo, has revealed that provisions have been made for the detainees at the stadium.

He is quoted by Standard Digital explaining that “I have been there and confirmed the facility has toilets, places for sleeping and other amenities. They will be screened before we know the way forward.”

Online sources claim the police plan to allow a few journalists into the stadium to witness the screening process first-hand.

Reports indicate that relatives of the detainees have camped outside the stadium and police stations where the suspects are being held.

Many have alleged that their homes were broken into and their elderly relatives as well as minors were summarily taken into custody.

Kenyans and Somali commentators online have also questioned the logic behind the plan to deport the suspects, with many claiming they are may be indirectly forced into terrorism.

Kenyan authorities have vowed to stem the flow of illegal migrants from neighbouring Somalia after reports emerged that the terrorists who laid siege on the Westgate Mall last year had filtered into the country with fake identification documents.