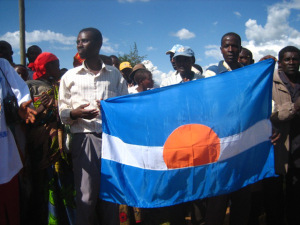 Burundian officials have confirmed that the Movement for Solidarity and Development (MSD) – a member of the opposition Alliance of Democrats for Change (ADC) – has been officially suspended following a violent conflict between members of the party and the police on March 8th.

According to the statement by Interior Minister, Edouard Nduwimana, the suspension will last for about four months, during which the party’s offices across the country are to remain closed.

This announcement confirms the interior minister’s warning last week that the MSD could be suspended for up to six months and possibly declared defunct.

Nduwimana described the March 8th incident, which saw the temporary detention of two police officers at the MSD headquarters, as “barbaric.”

He further accused the chairman of the MSD, Alexis Sinduhije – who is reportedly currently on the run – of inciting his supporters to commit violent acts of revolt.

The Secretary General of the MSD, Francois Nyamoya, in response, has noted that the temporary suspension is unfair, but that it will be adhered to.

“We had already effectively been suspended because for months now, the government has prevented us from demonstrating or even from holding meetings,” he said.

Nyamoya went on to relate that members of the MSD were holding a “calm demonstration” on Saturday, March 8th, before the police intervened.

Reports indicate that Sinduhije and other MSD officials and supporters had set out to jog to the party’s headquarters in Bujumbura on the fateful day.

In the resulting confrontation with the security forces – who have accused the group of plotting a violent riot – about seventy-one MSD supporters were arrested.

The spokeswoman for the public general prosecutor, Agnes Bangiricenge, has told Reuters that all the MSD sympathizers in custody will be charged – along with Sinduhije when/if he is apprehended – for participating in an insurrection.

She, however, noted that the trial date is yet to be set.

Reports indicate that the group could be handed life imprisonment sentences if they are found guilty.

Burundi has struggled to rebuild from over a decade of wars between its two main ethnic groups – the Hutus and the Tutsis.

In the build up to the nation’s elections in 2015, opposition groups are once again accusing the ruling CNDD-FDD of conniving to undermine their power before the polls.

Leonce Ngendakumana, Chairman of the ADC, is quoted saying “We know for sure that this is an existing plan by the ruling CNDD-FDD party to exclude from competition any opponent who can pose a threat in the 2015 elections.”

Photo: Supporters of the suspended Movement for Solidarity and Development (MSD) with the party’s flag during the 2010 elections.