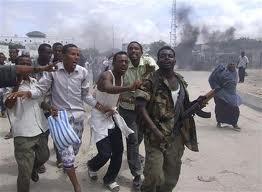 Hundreds of discharged soldiers and disabled army veterans staged a demonstration in front of the presidential compound in Mogadishu on Saturday.

According to reports, the angry demonstrators marched to Villa Somalia – the presidential residence – in reaction to a recent decision that resulted in the discharge of over 700 soldiers including commanders, captains, and deputy commanders from the Somalia National Army (SNA).

This mass discharge comes reportedly at a time when the army is planning to embark on raids against al-Shabab.

The discharged soldiers accused the army general Dahir Khalif of irresponsibility, claiming their rights were violated while performing their national duties.

During the reported protest, most officers were in their uniforms with some purportedly displaying their ranks.

According to reports, the discharged officers also claimed that the army general issued false statements, adding that he discharged them over unclear circumstances.

The protesters also accused Dahir Khalif of betrayal in spite of demonstrating diligence to service. A spokesman for the ex-officers remarked that the commander had erred in dismissing them from their posts, while engaged in countering al-Shabab rebels.

The demonstrating ex-soldiers claimed that the dishonorable discharge was detrimental to the livelihoods and welfare of their families. They further added that the discharge posed a threat to their personal lives because of what they claimed was retribution by al-Shabab.

According to reports, the protesters stated that the government had exposed their identities following the dishonorable discharge, making them vulnerable to retributory attacks.

Reports indicate the ex-soldiers staged demonstrations at the Jaale Siad monument before proceeding to the Villa Somalia.

On the other hand, the SFG defence ministry has justified the discharge of the 700 plus officers from various ranks.

According to sources, the defence ministry cited AWOL (away without official leave) status for some, while others supposedly held other government positions. Reports indicate that the General, Dahir Khalif, cited inefficiency and incompetence at Tuesday’s media briefing, as the main reasons for the mass discharge.

In a separate protest on Saturday, disabled officers demonstrated against the lack of support by the Somalia Federal Government (SFG).

The disabled veterans protested over support services, claiming the government has halted the provision of their regular services including salary and food.

The recent protest highlights a similar allegation that took place last year within the Somalia National Army. According to reports, two senior officers resigned following a rift among the officials of the defense ministry. The senior officers reportedly resigned after the army commander failed to cater for the families of some deceased soldiers, despite reports that they lived in poverty.

Col. Hussein has reportedly asserted that the national defense is obligated to offer benefits to the families of the deceased officers. But the defense ministry and commanders of the army were unavailable to comment on these allegations.

Meanwhile, sources within SNA say the recent sackings were in line with clan politics of SFG’s President, Hasan Sheikh, whose intrusion in military affairs is alleged to be a concealed abetment of al-Shabab activities.