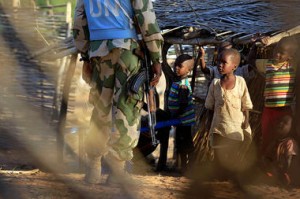 Since December, international attention and focus has shifted to South Sudan as violence and a rising humanitarian crisis intensifies in the world’s newest nation.

Yet in the north, in Sudan itself, escalating violence, displacement, and new political developments in the areas along the nation’s periphery — Darfur, South Kordofan, and Blue Nile — are going largely unnoticed.

The numbers of casualties and displacements in these areas are at their highest levels in years and continue to grow.

A new Enough Project report analyzes the impact of recent developments and urges policymakers to remain attuned to developments on multiple fronts in Sudan and South Sudan.

The report, “Forgotten Wars: Sudan’s Periphery Smolders as Focus Turns to South Sudan,” documents the continued violence and critical humanitarian needs of those displaced from and within these peripheral areas.

In November 2013, the Sudanese government launched a large-scale military campaign on Darfur, South Kordofan and Blue Nile that has included both aerial bombardment and ground attacks. Some 400,000 people were displaced in Darfur in 2013 alone, with heavy air strikes in the East Jebel Marra region and the villages south of Nyala in South Darfur displacing thousands.

The return of Musa Hilal, an influential Darfuri leader, also signals the potential for renewed and greater violence in Darfur.

South Kordofan is seeing the largest number of bombings and civilian causalities in two years. Some reports indicate that more than 25,000 more people have fled their homes with new attacks.

The Sudanese government has targeted Blue Nile state with deadly new tactics and weapons that have increased casualties and caused thousands to flee into South Sudan and Ethiopia, where many struggle to receive adequate humanitarian assistance.

The report recommends a robust effort to pursue comprehensive peace processes in both countries that include all stakeholders and addresses the core drivers of violence.

It warns: “A disconnected perspective on one country, one area, and one group—to the exclusion of others—cannot work. The unions, disunions, and shifting alliances reverberate through conflict areas throughout both countries and directly shape the struggle for control of the state on both sides.”