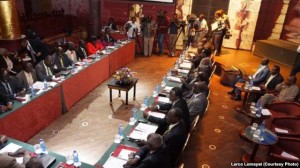 The second round of negotiations between the warring factions in South Sudan failed to resume on Monday, despite earlier indications from both delegations that the talks were scheduled to recommence.

Spokesman for the government of South Sudan, Michael Makuei, told AFP that the meeting has been moved to Tuesday.

According to him, “We are informed that his excellency the prime minister of Ethiopia wants to attend the opening session. We are told that it is tomorrow afternoon.”

Earlier, Ethiopia’s Foreign Ministry’s spokesman, Dina Mufti, revealed that both sides have reiterated their commitments to the negotiations, which he disclosed is set to be moved to Debre Zeit – 45 kilometers south of Addis Ababa.

“I am very much optimistic because at least both sides seem to see the need for peaceful settlement, for political dialogue, and both sides seem to be committed to it despite the sporadic fighting here and there,” he told the VOA.

Although a ceasefire agreement has been in place for about three weeks, isolated fighting has been reported in at least three states.

Human rights groups have accused the United Nations of stalling in releasing its report on the war in South Sudan.

Although, UN officials have hinted at gross violations of human rights during the war, the organization is yet to officially release any report detailing these claims.

Meanwhile, the UN Secretary General Ban Ki Moon has vowed to prosecute all instances of human rights violations during the two-month civil war in South Sudan.

Last week, the UN disclosed that up to 7 million people face the threat of food insecurity in South Sudan. The organization has noted that it is in need of over $1 billion to provide aid to refugees across the world’s youngest nation.

Over the weekend, the United States government expressed concerns over reports of violations of the ceasefire agreement in South Sudan.

The statement by the US State Department Spokeswoman, Jen Psaki, called for the ‘redeployment or phasal withdrawal’ of foreign troops in South Sudan, citing concerns of the conflict spreading beyond the borders of the war-torn nation.

However, Ugandan officials responded Monday that the Ugandan People’s Democratic Force will only be withdrawn from the warring nation on the insistence of the government of South Sudan or the Inter-governmental Agency for Development (IGAD).

The Inter-governmental Agency for Development (IGAD), the chief mediator between the warring factions in South Sudan, says it has deployed monitors to investigate if the ceasefire agreement is being violated, as reports claim.

Reports indicate an IGAD delegation has shuttled between its member countries over the past two weeks to brief and consult with regional leaders on the status quo of South Sudan.

Back in Addis Ababa, the rebels continue to insist on the release of the remaining four ex-state employees in custody, whom the government plans on prosecuting, along with Riek Machar and 3 others.

Rebel Spokesman Yohanis Musa Pouk has told AFP that his side will insist another leader is chosen to rule South Sudan until the country’s second ever general elections in 2015. But he says he is not optimistic about the ongoing talks.

Reports that President Salva Kiir has ordered the resignation of Warrap State’s Minister of Information, Nenaguek Kuol Mareng, over allegations that she is connected with the rebels, has sparked a debate among South Sudanese pundits online.

While some have expressed confidence in the government’s eagle-eyed monitoring of state affairs, others have echoed the Information minister’s disapproval of the government “eavesdropping” on the conversation of citizens.

Photo by Larco Lomayat: Delegates of both sides of the divide in South Sudan during the negotiations for the ceasefire.