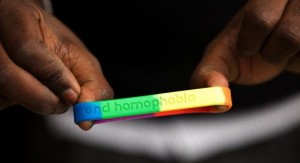 Monday was designated a “Global Day of Action” by homosexual activists across the world against Uganda’s Anti-Homosexuality Bill, which is currently awaiting presidential signature to become law.

While international activists such as Amnesty International campaigned online, lesbian, gay, bisexual and transgender (LGBT) groups in Kenya staged a protest in front of the Ugandan High Commission.

Reports indicate that the protesters failed to secure a meeting with the High Commissioner to deliver a letter detailing their concerns.

Since the Anti-Homosexuality Bill received parliamentary assent in late December 2013, critics of the bill say persecution against homosexuals has increased in Uganda.

At least 7 people have been arrested over speculations that they are homosexuals.

Activists say suspected homosexuals are harassed, attacked by mobs, and when taken into custody, are subjected to unscientific tests to confirm their sexual orientation.

Many civil liberty groups have lent their voices in dissent against the bill, which President Yoweri Musuveni has until Feb. 23rd to sign into law.

But President Musuveni, a strong advocate of the belief that homosexuality is unnatural, says he has commissioned medical experts to provide evidence to support his stand. The president has said that he will only sign the bill into law if the medical reports proves his assertions correct.

Meanwhile, pundits have noted that another reason President Musuveni is stalling signing the Anti-Homosexual Bill into law may be due to concerns of an unfavorable international reaction.

Recently, the Nigerian government has come under a barrage of criticisms for passing an anti-homosexuality law similar to the draft bill in Uganda.

Reports have emerged that a letter of protest signed by over 14 organizations and 77 individuals, including Uganda’s former vice president Dr. Speciosa Wandira Kazibwe, was delivered to the Ugandan President today.

The physicians, researchers and academics reportedly attempt to provide an explanation into the science of sexual orientation and the effects of the criminalization of homosexuality in the letter.

It is unclear if the letter will satisfy President Musuveni’s demand for scientific evidence on the origins of homosexuality, or if it will deter him from signing the bill into law, as activists are demanding.

However, many critics say they hope it will force Uganda’s leader to give second thought to what has been described as “state sanctioned homophobia.”