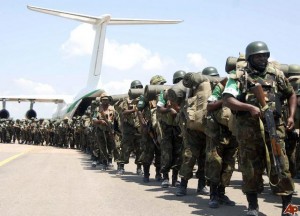 The government of Uganda has come under immense criticism for what – under different circumstances – would have earned it international accolades.

Until now, it was generally believed that Ugandan troops in South Sudan were protecting civilians and vital facilities from rebel attacks. However, it has been revealed that Ugandan soldiers are actively involved in battle.

On Wednesday at a summit in Angola, President Musuveni revealed that his men had been involved in a “big battle” alongside the South Sudan Liberation Army (SPLA) against rebels.

Although President Musuveni failed to disclose exactly how many casualties his side recorded in the fight, he admitted they had sustained some casualties, but was quick to also point out that the rebels came out of the fight worse off.

Back in Uganda, several commentators have criticized the government for meddling in the affairs of another nation.

While some pundits say President Musuveni is looking to extend the support he provided the SPLA during their years of war against Sudan – possibly with an eye on building an economic relationship between both nations. Others say the President’s move is no surprise given his tendency to deploy the Ugandan People’s Democratic Force to any of her neighbors experiencing instability, on the slightest invitation.

Ugandan lawmakers have also criticized the government for deploying soldiers to South Sudan without parliamentary consent. The Ugandan Attorney General and Defense Minister have both been summoned by the nation’s parliament to provide explanations over this contentious decision, which has been debated nationwide.

According to observers, Uganda’s role in the conflict could compromise the ongoing peace talks supported by the Inter-Governmental Agency for Development (IGAD) – of which Uganda is a renowned member.

In 1998, when Rwanda was engaged in ethnic-based violence under similar circumstances, the decision of neighboring nations not to actively get involved in the conflict has been widely criticized in retrospect.

So what separates the current insurrection in South Sudan from the violence in Rwanda, which the world has been working so hard to erase from its memory. And why are world leaders failing to act based on the lessons learnt from that episode?

Explaining things, Paul Munge, a researcher and political analyst says the circumstances surrounding the two scenarios are quite different.

According to him, while there was basically no prospect for negotiations in Rwanda, in South Sudan currently, both parties have dispatched delegations to Addis Ababa for peace talks.

While Mr. Munge agrees President Musuveni was right to deploy Ugandan troops to protect civilians and facilities in South Sudan, he is quick to point that Uganda’s military have no business getting directly involved in the conflict.

These sentiments have been echoed by the spokesman for Reik Machar’s delegation at the ongoing peace talks in Addis Ababa.

According to Maboir Garang, “foreign troops have complicated the conflict so I think it’s also a matter of common sense for them to withdraw.”

The rebels have allegedly added the withdrawal of Ugandan troops to the list of primary preconditions for peace talks to proceed. Prior to this, the talks were reportedly being hampered by the South Sudanese government’s refusal to release 11 ex-ministers in custody, who have been linked with the insurrection.

The cease fire talks are at a deadlock currently, amid reports that rebel forces have recaptured Malakal in Upper Nile state, and are planning to attack Bor, capital of Jonglei state.

Meanwhile, Nhial Deng Nhial, leader of the delegation in South Sudan representing President Salva Kiir, is reportedly on his way back to Juba for consultations with the leader of the troubled nation.

The United Nations and Human Rights Watch have both raised allegations of both sides committing crimes against humanity during this month-old conflict.

The UN Secretary General, Ban Ki Moon, has vowed to prosecute both parties for these atrocities.

The UN reportedly has investigators currently in the South Sudan, working on a report which will be due in about two weeks.