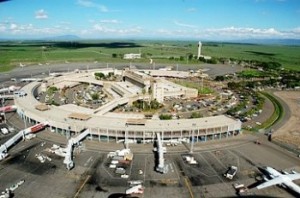 An explosion near the Jomo Kenyatta International Airport on Thursday evening has generated widespread apprehension among many Kenyans over the state of security in one of east Africa’s most successful nations.

According to local reports, a loud blast was heard around the departure terminal of Kenya’s main airport yesterday evening.

This resulted in widespread panic and disruption in airport services, before security officers rushed to the scene a few hours later.

Police Chief David Kismayo has revealed that the blast, which occurred in the Java Coffee Shop, was caused by a loose light bulb falling into a trash can.

The resulting explosion is reported to have destroyed the metal trash can and part of the roof of the famous outlet.

Despite official reports on the cause of the explosion, pundits continue to speculate on other possible causes. According to some, the explosion may have been caused by an improvised explosive devise, possibly left in a luggage in the coffee shop.

This version of the event has been supported by two facts; the allegedly high level of secrecy surrounding investigations into the incident and a shoot out just outside the airport before the blast was heard yesterday.

Kenyan security officers have confirmed that the shoot out outside the Jomo Kenyatta International Airport on Thursday occurred after a Toyota car unlawfully crossed a security barrier. Airport officials reportedly opened fire on the car as it sped away.

Today, Kenyan security officials say they have recovered a Toyota car with about six bullet holes on its body. The car also reportedly contained a deceased man and an un-detonated improvised explosive device.

It is currently unclear how the car, which was allegedly recovered at a slum near the Shauri Moyo shopping center, relates to yesterday’s incidents.

However, many pundits have noted that it is most likely the same Toyota car involved in the confrontation with airport security officials yesterday which has been recovered.

Meanwhile, locals told reporters that two men scuttled away from the car on a motor cycle after it grounded to a halt yesterday.

Security officials have vowed to launch a thorough investigation into the incident.

Kenyans continue to live under a perpetual threat of attacks from al Shabab over the east African nation’s intervention in the ongoing war in Somalia.

In the past, al Shabab have attacked several locations in Kenya including shopping malls, official buildings, bus stations and even night clubs.

Photo: An aerial view of the Jomo Kenyatta International Airport.