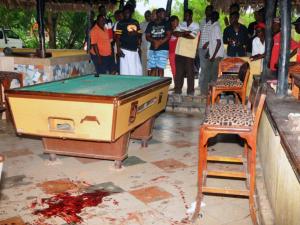 Kenya’s security agencies continue to grapple with challenges in tackling the increasing rate of terrorist incidents, which has left dozens dead and scores wounded in the country in the past decade.

The country has barely settled into the New Year before recorded its latest terrorist attack, which occurred yesterday at Tandoori, a popular bar frequented by tourists.

This attack, one of a series of bomb blasts in the past week by Al Shabab, targeted an area popular to tourists.

Kenya’s coast is a popular destination for tourists, who are drawn to the white sandy beaches.

However, according to reports, religious tension and extremist groups have plagued Kenya’s coast, a predominantly Muslim region. Since Kenya sent its troops to invade the southern region of Somalia in October 2011 in a bid to fight al Shabaab rebels, the nation has encountered various terrorist attacks.

Last month, culprits allegedly threw a grenade at a vehicle carrying two British nationals however, the grenade failed to detonate.

According to witnesses, yesterday’s incident took place at 3.30 am, two people on a motorcycle reportedly approached the crowded club and one of the alleged culprits hurled a grenade toward the customers before they sped away.

Authorities say it is not yet clear who is behind the recently reported attack. Jack Ekakuro, the OCPD, told journalists that the bar was crowded with New Year’s revelers when the supposed attack took place.

In the past, the Kenyan government have blamed terrorist attacks on Al Shabab, which claimed responsibility for last year’s attack on Westgate shopping mall in Nairobi.

The police have revealed that injured persons have been rushed to hospital and are said to generally be in stable condition.

However, one of the victims is reported to have suffered serious injuries and underwent surgery at a nearby local hospital. According to Nelson Ngoa, a barman at Tandoori, customers in the popular bar at the time of the attack comprised German, British, and Italian nationals.

However, Aggrey Adoli, a Police Commander, asserted that the wounded victims were all Kenyans. Adoli vowed that the police would track down and punish the culprits for their cowardly act.

This attack is a huge blow to the tourism sector in Kenya, especially since Diani is among the busiest Coastal regions that attracts a huge number of both international and local tourists. The holiday season is also one of the busiest times in this part of the country.

As the country awaits a complete report from the government, Kimaiyo assured Kenyans that the country is safe and officers are pursuing the alleged attackers and other radical elements.

Photo: Onlookers at the site of the alleged attack at Tandoori bar (AP)