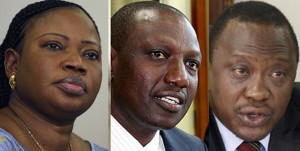 Today, the International Criminal Court (ICC) responded to a letter by the African Union (AU) regarding the trial of Kenyan President Uhuru Kenyatta and his deputy William Ruto.

In the letter to the President of the ICC on the 10th of this month, the AU cautioned that the ongoing case was “beginning to adversely affect the ability of the Kenyan leaders in discharging their constitutional responsibilities.”

It went on to argue that “Kenya as a member of the international community and as an active participant in the international arena will clearly be disadvantaged should the Suspensive Effect be allowed to continue. This means that during the absence of the Deputy President at the trial, the President of Kenya will automatically be prevented from meeting his international obligations.”

In response the President of the ICC, Judge Sang-Hyun Song wrote, “the Presidency has no legal powers to consider arguments and concerns related to ongoing cases, and that such matters should be raised before the relevant Chambers in accordance with the Rome Statute and the ICC’s Rules of Procedure and Evidence.”

Although African Presidents had supported the move to resolve conflicts in the Hague, many of them are beginning to grow a distrust for the ICC. The AU’s letter demanded that the ICC transfer the case involving Kenyatta and his vice to a “reformed jury” in Kenya capable of handling with the case.

At the close of an AU meeting earlier this year, Ethiopian Prime Minister Hailemariam Deslegn said “African leaders have come to a consensus that the (ICC) process that has been conducted in Africa has a flaw.” He added that although the intention of the court was to maintain order, “the process has generated into some kind of race hunting.”

The ICC has responded unperturbed by these requests, just falling short of reminding the AU that the ICC “is intended to complement existing national judicial systems, and may only exercise its jurisdiction only when national courts are unwilling or unable to investigate or prosecute such crimes.”

The question, it seems, is not about the establishment of the crime against President Kenyatta and his vice, but in the way the case is being handled. Ugandan President Yoweri Musuveni said “We know the origin of the past mistakes. The ICC way is not the right way to handle those mistakes.”

He added that “The ICC in a shallow, biased way, has continued to mishandle complex African issues. Kenya is recovering. Let her recover.”

All said, many continue to question why the AU has not yet set up a continental court to handle these “complex” local issues.