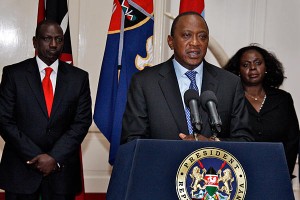 President Uhuru Kenyatta of Kenya has filed a new petition with the International Criminal Court to allow his trial proceed in his absence.

This new petition comes after the ICC excused Vice President William Ruto to return home to attend to issues pertaining to national security. Although some commentators have highlighted that Prez Kenyatta may be unduly taking advantage of the Westgate attack to push the bid to excuse himself from the ICC proceedings. Many agree he has good reasons to seek exemption from his trial since the Westgate attack happened when both the President and his deputy were out of the country. Rev. Wellington Mutiso, a Baptist preacher said “These attacks are an indication that the president has to be here. His presence is needed to assure the citizens.”

Prez Kenyatta’s petition argued that “The people of Kenya were fully informed about the ICC proceedings when they elected President Kenyatta to lead the nation, and, having done so, they have a legitimate expectation that their country’s democracy should be respected by the wider international community.”

According to his legal team, the President will take part in the opening, closing and delivery of judgement via a video link. He will also be kept updated of the day to day proceedings of the court via transcripts.

Steven Kay, President Kenyatta’s lawyer said, “President Kenyatta is satisfied that he will be able to adequately manage his defence by delegating responsibility to his legal team who are in receipt of his full instructions.”

This is the second petition Prez Kenyatta is putting forward to be exempted from his trail. The ICC judges are yet to rule on the first petition. The President’s lawyer however is upbeat about the petition and feels the acceptance of Vice President Ruto’s petition to be released from trial to deal with the Westgate issue is a positive sign that Kenyatta’s petition will also be accepted.

A section of the public see his petition as a violation of the notion of “equality before the law.” Prosecutor Adesola Adeboyajo described the President’s petition as “disrespectful.” She said if granted the ruling “would violate [the] bedrock of legal principle that all are equal, that official positions are no hindrance to an ICC process.”