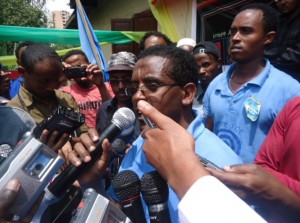 A large protest demonstration that was called by the opposition Semayawi (Blue) Party in Ethiopia’s capital Addis Ababa failed to take place after security forces blocked roads and bridges leading to the protest site.

Police surrounded Semayawi Party leaders and members as soon as they left the party headquarters and started marching toward Meskel Square. Police also detained several activists, but released them a few hours later.

In a brief speech at the start of the attempted demonstration, Semayawi Party chairman Yilkal Getinet said that the purpose of the protest is to ask for the release of political prisoners and to demand respect for the constitutional rights of citizens.