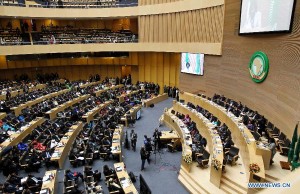 Standard Digital-(Addis Ababa)-African Union chiefs held an emergency meeting Monday to hammer out a continent-wide strategy to deal with the Ebola epidemic, which has killed over 2,000 people in west Africa.

“Fighting Ebola must be done in a manner that doesn’t fuel isolation or lead to the stigmatisation of victims, communities and countries,” AU commission chief Nkosazana Dlamini-Zuma, speaking at the opening of the meeting.

Dlamini-Zuma told the executive council of the 54-member body, meeting at the bloc’s headquarters in the Ethiopian capital Addis Ababa, of the urgent need to “craft a united, comprehensive and collective African response” to the outbreak.

The meeting came as hopes rose of a potential vaccine to provide temporary shield against Ebola.

A novel vaccine tested so far only on monkeys provided “completely short-term and partial long-term protection” from the deadly virus, researchers reported in the journal Nature Medicine.

The study endorsed approval for tests on humans, which would begin in early September, with first results by year’s end.

The death toll from the Ebola epidemic — which is spreading across west Africa, with Liberia, Guinea, Sierra Leone the worst hit — has topped 2,000, of nearly 4,000 people who have been infected, according to the World Health Organization.

Dlamini-Zuma warned that in the battle to stop the spread, “we must be careful not to introduce measures that may have more… social and economic impact than the disease itself.”

With border restrictions hampering trade, food prices are rising, she said, echoing the UN’s warning of serious foot shortages in the worst-hit countries.

“We should put in place tough measures to halt the spread of the disease, but we must also put in place measures to enable agriculture to continue and support the traders,” Dlamini-Zuma added.

“The economic impact of the Ebola outbreak will be significant,” said Carlos Lopes, executive secretary of the UN Economic Commission for Africa (UNECA).

“ Ebola can only be tackled through massive investments,” Lopes added, as AU members called for more financial support in the fight against Ebola.

The crisis has stirred a fierce debate about how the world should have responded after first reports trickled out from some of the world’s poorest countries with dilapidated medical infrastructure.

Dlamini-Zuma it has highlighted the “weakness of public health systems”, with affected countries suffering from a “severe shortage” of health workers.

“As we finalise our response to this grave challenge that confront us all, we must be resolute about winning the battle.”

On Sunday, President Barack Obama said the US military will join the fight against the fast-spreading disease, saying that the deadly toll was being exacerbated because of the rudimentary public health infrastructure.

The pledge of US military support follows the European Union’s decision on Friday to sharply increase funding to tackle the outbreak, boosting previously announced aid to 140 million euros ($183 million).

The European package is designed to support overstretched health services, fund mobile laboratories for detecting the disease, safeguard the provision of food, water and sanitation as well as help the broader economy and strengthen overall public services.

Aid agencies including Medecins Sans Frontieres have warned the world is “losing the battle” to contain the disease.