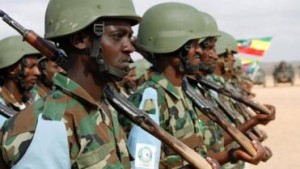 Ethiopian security officials have reportedly prevented a terrorist attack in the country’s capital Addis Ababa, after a suspected al Shabab suicide bomber was arrested on Tuesday.

According to local reports, the terrorists had intended to detonate explosives at several locations in the city.

Officials say the Somali-based Islamic extremists have unsuccessfully attempted to execute attacks in Ethiopia on many occasions this week .

A few months ago, one of the group’s leaders, Ahmed Godane, issued a declaration of ‘holy war’ against Ethiopia. He directed al Shabab loyalists to strike at Somalia’s historically antagonistic neighbour; accusing Ethiopian authorities of working with the United States.

Meanwhile, this week the United States’ and Canadian embassies in Ethiopia have both issued warnings about terrorist plots to attack Ethiopian and western interests in the country.

In a recent statement, the military has urged the public to co-operate with the security agencies by reporting any suspicious people or activity.

Despite calls to withdraw from the African Union Mission in Somalia (AMISOM), Ethiopian authorities have vowed not to prematurely pull-out of the war-torn country.

While Ethiopia seems to have been spared from the brunt of the terrorist attacks its neighbours have endured, the authorities say they have quelled many deadly plots before they were completed.

In October last year, two Somali terrorists, whom the authorities believe were planning to carry out a suicide attack on football spectators, blew themselves up accidentally in Bole district, Addis Ababa.