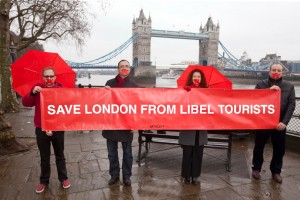 Elias Kifle is an Ethiopian journalist who runs a news website, the Ethiopian Review, from his exile in the United States. He is a fierce critic of the Ethiopian government, which is among the top ten “jailers” of journalists worldwide, and he has twice been sentenced to life imprisonment by it — once for treason, in 2007, and once for supposed “terrorism”, in 2012.

Yet, in an unlikely twist of fate, the Ethiopian authorities are not the only ones pursuing him in court: Elias Kifle’s name appears with some regularity in the cause lists of the London libel courts. Although his website is run from the US, publishes to an Ethiopian audience on matters concerning Ethiopia, the London courts have warmly welcomed those who wish to sue him for libel. Prime amongst his pursuers has been Ethiopian-born billionaire, Sheikh Mohamed Al-Amoudi.

Mr Al Amoudi, a businessman so keen to preserve his reputation that his Wikipedia entry has been flagged up as inappropriate because it has been edited by people who have a “close connection” with him, has been granted two default judgments against Elias Kifle: a £175,000 award made in 2010, and a £180,000 award made last week.

Being based in the States and lacking the financial means to hire lawyers, Mr Kifle chose not to defend either of these claims. Last week’s case was allowed to proceed because of Mr Al Amoudi’s business activities and reputation among Ethiopians in London, five of whom gave evidence as having read the piece in question; the fact he is a “frequent visitor” to London; and the fact that Mr Al Amoudi’s children were educated in England. The judge, Mr Justice Eady, does not appear to have considered whether it is even remotely feasible for an Ethiopian journalist exiled in the US and who runs a news website on a shoestring budget to obtain the services of libel defence lawyers. Instead he cites Kifle’s rude responses to Al Amoudi’s lawyers as evidence of Kifle’s intent to wage a “campaign of denigration … without ever having to face [Al Amoudi] in court”.

In many ways, there is nothing new about this — readers of this website will be familiar with the Ukrainian website being sued in London by a Ukrainian oligarch over articles published in Ukrainian; and a few years ago my organisation, the Media Legal Defence Initiative, had to call on the pro bono services of media lawyer Mark Stephens to neutralise a London libel threat against the Nepali Times (which, for the avoidance of doubt, publishes from Kathmandu, Nepal). In both these cases, as in Kifle’s case, the claimants could prove some connection to London — not surprising since most of the world’s nationalities are represented there and the publications in question were accessible online.

But in all these cases, the courts have completely failed to appreciate the difficult position of foreign defendants. Judges don’t appreciate the real chilling effect exerted by the financial cost of defending a libel suit in London (estimated in an Oxford University study reporting as more than a hundred times more expensive in London than elsewhere in Europe). Why should a defendant in the US, Nepal or Ukraine be expected to rack up hundreds of thousands in legal fees (assuming for the moment they have that kind of money in the first place) when they are unlikely to recover this even if they win? And is it really that surprising that an exiled journalist twice sentenced to life in prison displays a certain amount of “scorn” for lawyers and legal proceedings (Mr Justice Eady’s disdain of Elias Kifle and his cavalier attitude to Al Amoudi’s lawyers is evident)? Even if they had a choice — which they do not, because they have no money — many defendants in these matters will prefer to suffer a default judgment, even if that means they will not be able to set up business in London in the future, over certain bankruptcy even if they win a case.

Over the last few years, libel tourism cases have continued to pop up despite international outrage. The US has adopted federal legislation barring the enforcement of English libel judgments — and even allowing for counterclaims — and last year, the Council of Europe adopted a recommendation on libel tourism noting that “[p]rocedural costs may discourage defendants from presenting a defence thus leading to default judgments.”

If the Defamation Bill goes through, the end of the phenomenon of libel tourism may be in sight. Under the new regime proposed by the bill, currently in its final stages in Parliament but in danger of disappearing in the Leveson maelstrom, libel proceedings against foreign defendants cannot proceed unless London is “clearly the most appropriate place in which to bring an action in respect of the statement”. Ministers have made it clear that this means judges must take into account the procedural (un)fairness of requiring a foreign defendant to travel thousands of miles and/or engage lawyers they cannot afford. Let us hope judges will apply this in the spirit it is intended — and let’s hope the bill is enacted; it would mean Elias Kifle’s name will appear in the London cause lists no more.

Peter Noorlander is CEO of the Media Legal Defence Initiative, an organisation that defends journalists’ rights and provides legal aid to journalists around the world