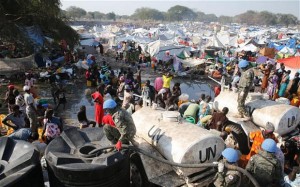 The Government of South Sudan has provided land space in four different states for the United Nations Mission in South Sudan (UNMISS) to build new camps for internally displaced persons.

The new camp sites are located in Juba, Bor, Malakal and Bentiu, according to the UNMISS.

A spokesperson for the organization, Ariane Quentier, revealed that the new camps will enable the decongestion of many makeshift facilities where civilians are currently sheltered in Juba.

She noted that these sites are “not really appropriate and suitable for our long term occupancy.”

Earlier in the week, the United Nations Security Council voted unanimously to extend the mandate of the mission in South Sudan by about six months – until November 30th.

The council charged the UNMISS to prioritize the protection of civilians and use all necessary means to prevent more violence in the world’s youngest nation.

The UNMISS was also tasked with supporting the implementation of the ceasefire agreement and investigating alleged human rights abuses.

The council strongly condemned reports of harassment of UN staff by South Sudanese security officers; noting that this might amount to war crimes. However, South Sudanese officials have denied the allegation.

The UNMISS and the government of the young nation have had a tense relationship after the humanitarian organization was accused of abetting the rebels earlier in the year. Nonetheless, President Salva Kiir has promised to continue to co-operate with the organization.

Meanwhile, the Chinese government have reportedly also presented a newly constructed camp for displaced people to the UNMISS. Local sources say refugees in UNMISS camps in Juba are additionally expected to be transferred to this facility.

Many critics have directed South Sudanese authorities to decongest the crowded refugee holding centers in Juba following the outbreak of cholera earlier in the month.

Nearly 50 people have been reported dead across the country as a result of the outbreak of this disease, which has been recorded in at least 3 states; Central Equatoria, Upper Nile and Jonglei. Reports indicate that over 600 cases of the disease are currently being treated.

The Juba City Council has cautioned butchers and vendors to maintain strict hygienic standards to prevent further spreading the contagion. The council has also banned the selling of food in open places and has embarked on sanitation programmes across the country.

Recently, the World Health Organization (WHO) announced that the disease outbreak was triggered by the ingestion of untreated water from the Nile river.

WHO country director, Dr. Abdimaisin Abubaker, revealed that “As we are doing the risk assessment, one common thing where all the cases that have been reported, all of them are drinking what we call untreated drinking water and all of them are coming from the river.”

He went on to reveal that the WHO has formed a task force to tackle the unfolding crisis.

Reports indicate that the United Nations Children Education Fund (UNICEF) has also commissioned an awareness programme to fight the spread of the disease.