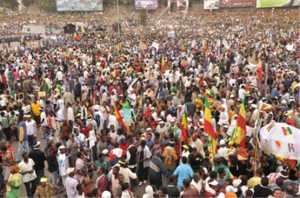 The Government and people of Ethiopia have commemorated the 23rd anniversary of the country’s adoption of modern democratic principles and structures.

On May 28th 1991, ‘Ginbot 20’ rebels from the ruling Ethiopian People’s Revolutionary Democratic Front (EPRDF) marched into Addis Ababa virtually unchallenged to mark their overthrow of the dictatorial communist government led by Hailemariam Mengistu.

This day, dubbed ‘National Day’, has since been celebrated in the country as an important milestone in its colourful history. Hundreds of people are reported to have gathered at the Addis Ababa stadium for an event to mark this milestone on Wednesday; where officials underscored the governments’ achievements and future plans. Nonetheless, many Ethiopians remain indifferent to the significance of this day.

The EPRDF has since been accused of committing the same crimes as its despised predecessor.

An Ethiopian pundit, Dimetros Birku, in a commentary on the occasion, explains that “Theoretically, and in retrospect, the day was meant to represent transformation from a repressive military rule to a democratic civilian government. Unfortunately, the then “liberating” guerilla force did not take much time when it turned itself into a regime at par with the collapsed military rule- almost by all measures of repression.”

While the Ethiopian government has made many commendable strides in health, power, agriculture and transportation, many pundits have questioned the real extent of the country’s loudly trumpeted economic growth. The government has also been charged with totalitarianism and adopting repressive strategies to control dissent.

The United States Department of State has extended a congratulatory to Ethiopia on this momentous anniversary. Reports indicate that Ethiopians across the world have also marked the occasion.