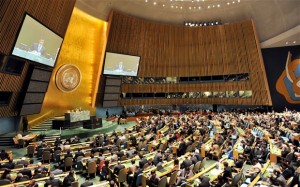 The United Nations Security Council (UNSC) has unanimously voted in three resolutions on Thursday to prolong the mandate of its peace-keeping missions in Abyei, Somalia and South Sudan.

The United Nations Interim Security Force for Abyei (UNISFA), which was created in 2011 to monitor security in the tightly contested area between the two Sudan neighbours, is set to continue its operations until October 15th.

However, the council did not make any changes to its mandate.

The council has charged the Sudanese neighbours to honour their June 3rd, 2011 Agreement; which arranges for the demilitarization of the area and for local administrative units to be created. The agreement also stipulates the formation of a joint border verification and monitoring mechanism.

Hundreds of South Sudanese citizens are reported to have made their way to Abyei since the young nation descended into a civil war late last year. While the protracted impasse over the ownership of the area has had negative effects on its resources and facilities, the new throng of refugees have compounded the situation, according to local sources.

Crime has reportedly been on the rise, while health service providers are struggling to remain open in Abyei.

Recently, the Ethiopian government has revealed that it will pull its forces from the region if both countries continue to stall in resolving their dispute, according to Sudan Tribune.

Meanwhile, the council has stretched the mandate of the United Nations Assistance Mission in Somalia (UNSOM) for another year until June 3rd, 2015.

The adjunct mission, whose mandate was set to end in June, is tasked with supporting the government of Somalia to rebuild the state and strengthen existing institutions. UNSOM reportedly also provides assistance to the African Union Mission in Somalia (AMISOM).

The council underscored the fact that the Somali government is behind schedule in its preparations for the country’s highly anticipated national elections in 2016. The council further directed Somali authorities to develop a clear plan for the upcoming elections and complete the formation of other complimentary institutions.

After losing most of their stronghold to government and AMISOM forces, al Shabab have embarked on a daring series of attacks on officials targets this year.

In the aftermath of a foiled siege on the parliament building in Mogadishu last weekend, many pundits are calling on the federal government to double its efforts at consolidating the peace and security of the war-torn nation.

In Guinea Bissau, the council voted to prolong the operation of the United Nations Integrated Peace-building Office (UNIOGBIS) by six months until November 30th.

While the house congratulated the country on successfully completing its presidential and legislative elections peacefully, it also charged the authorities to work towards consolidating the stability of the country.

The council went on to urge the government to develop strategies to fight cross-border crime and investigate report of human rights abuses.

Local sources say the new leader, President Jose Mario Vaz, is committed to tackling the issues that have consistently driven the nation to plunge into a political crisis.