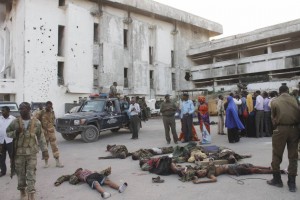 A failed attack by al Shabab terrorists on the Somali federal parliament this weekend has triggered the resignation of the security minister and may eventually lead to an overhaul of the country’s security organs, according to local sources.

Reports indicate that at about midday on Saturday a vehicle-borne improvised explosive device detonated outside the parliament building in Mogadishu. This was followed by a prolonged gun-battle between security officers and the terrorists; who reportedly gained control of the second floor of the building. However, the Somali Army and African Union forces successfully overpowered the attackers.

Local reports have pointed out that the attack occurred during a parliamentary session. However, none of the hundred-plus legislators in the building are among the dead.

Police Spokesman, Kasim Ahmed Roble, has revealed to the VOA that about 10 soldiers from the Somali army and AU peace-keeping force are among the fatal casualties, while 8 of the terrorists were also killed. He further revealed that nearly 20 people – including four lawmakers – sustained injuries from the attack.

Although local sources have disclosed that the Somali army and AU forces responded swiftly to quell the brazen attack, it has, nonetheless, given rise to some questions about Somalia’s security organs.

Somalia has been engrossed in more than two decades of civil war until the past few years when conflict resolution efforts gave way to the development of a constitution and the formation of a federal parliament in 2012.

al Shabab, a vestige of Islamic courts that exercised control of vast portions of the country during the interregnum, have struggled to retain their reign over the people. The group are reported to be increasingly losing their ground due the concerted efforts against them. Reports indicate that this year alone, the terrorists have lost several towns under their control.

According to some pundits, this is directly connected with the increase in audacious attacks by the group. This year al Shabab terrorists have conducted many high profile attacks, but many have not been successful. The assassination of two legislators last month is seen as a high point in the recent campaign by the al Qaeda-linked terrorists.

President Hassan Sheikh Mohamud, who was reportedly in South Africa when the attack unfolded, has condemned the move by the terrorists.

Reports indicate that he has cut short his trip and is due to return to Somalia on Monday to deal with the ensuing crisis.

Meanwhile, Security Minister, Abdikarim Hussein Guled, has officially announced his resignation. Local sources say his decision follows a directive from the president ordering all the country’s top security operatives to step down.

Prime Minister Abdiweli Sheikh Mohamed has welcomed the abdication of the security minister; describing it as ‘bold.’

The United States, Britain, Turkey, as well as the United Nations’ Secretary General, Ban Ki Moon, the organization’s special representative to Somalia, Nicholas Kay, and the Security Council, have all condemned the recent attack and have pledged solidarity with the government and people of Somalia against terrorism.

A spokesman for al Shabab, Ali Dheree, has, however, announced this weekend that the group plans to conduct more attacks on legislators.

The recent rise in terrorist activities in the country is likely to affect the plans of the Somali government to establish local administrative units and invite Somali refugees back home, according to some commentators.