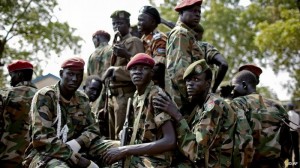 The Intergovernmental Authority for Development’s (IGAD) monitoring and verification teams have kicked off their operations in South Sudan.

According to the Ethiopian Foreign Ministry, the teams will be supervised by a joint technical committee made up of the warring parties as well as representatives of IGAD member states, the African Union, the United Nations and other groups.

Although representatives of the South Sudanese government and rebels agreed to a cessation of hostilities agreement in January, armed combat have been reported in at least three states in the young nation.

Tens of thousands of people have been reportedly killed and about one million displaced since fighting erupted in Juba between two factions of the South Sudanese army in December 2013.

Reports indicate that IGAD monitoring and verification teams have been dispatched to Bor, Bentiu and Malakal – others are expected to also be sent to Akobo, Nassir and other locations in South Sudan.

Meanwhile, the US Secretary of State, John Kerry, has urged South Sudanese authorities to do more to “stop the fighting, provide full humanitarian access, and cease harassment and threats against the UN Mission in South Sudan (UNMISS).”

He went on to reiterate the support of his government for efforts to end the conflict, but noted that the US will “not stand by while the hopes of a nation are held hostage to short-sighted and destructive actors.”

Earlier in the month, the US President gave his assent to the use of “targeted sanctions” against individuals who support the war in South Sudan by “undermining democratic processes or institutions or by obstructing the peace process and against those who commit human rights abuses.”

Reports indicate that the humanitarian crisis in South Sudan is growing more dire with each day. According to the United Nations Children’s Fund (UNICEF), “Currently, over 3.7 million people, including almost 740,000 children under five, in the country are at high risk of food insecurity.”

Lacks of funds and difficulties in reaching many of the internally displaced persons have been cited as the two main impediments to the success of aid operations in South Sudan.

Now with the rainy season fast approaching, the rate of infections of communicable diseases are expected to increase sharply, especially among people in crowded refugee camps and other makeshift shelters across the country.

Meanwhile, the World Food Programme (WFP) has disclosed plans of delivering about 30,000 metric tonnes of food to persons in the most inaccessible part of the South Sudan through air drops to alleviate the humanitarian crisis and curb the influx of refugees to neighbouring countries.