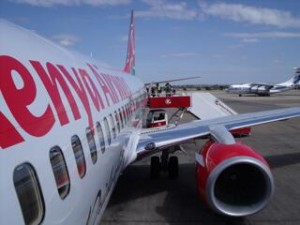 A Kenya Airways Embraer ERJ-190 flight from Nairobi to Dar es Salaam has skidded off the runway as it landed at the Julius Nyerere International Airport.

Reports indicate that the plane landed during a heavy rain. However, the Director General of Tanzania’s Civil Aviation Authority (TCAA), Fadhili Manongi, has revealed that preliminary analysis shows that the accident was caused by an engine failure, according to a report by Africa Review.

Meanwhile, the Managing Director of Kenya Airways, Titus Naikuni, has revealed that all the 46 passengers and 6 crew members on board have been successfully evacuated from the plane – reportedly through an emergency door.

He noted that “three passengers suffered minor injuries during the evacuation and have been transferred to hospital for further observation.”

The MD further noted that “Kenya Airways wishes to confirm that we are cooperating fully with government investigative agencies in Tanzania and Kenya on this matter.”

Reports indicate that the plane did not collide with any buildings as it unnaturally changed direction.

After struggling with losses in 2012 and early 2013, Kenya Airways has reported an impressive growth in earnings.

The company recently entered into a partnership with South Africa’s kulula.com and has disclosed plans of broadening its fleet with nine Boeing 787 Dreamliners.