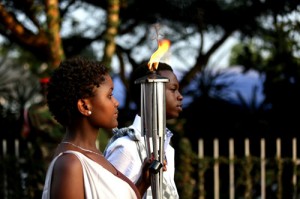 Rwandan authorities and several officials from governmental and non-governmental agencies have marked the launch of the 20th anniversary remembrance of victims of the genocide in the east African nation in 1994.

At the ceremony in New York on Thursday, Rwanda’s Permanent Representative to the United Nation and Minister of State in Charge of Cooperation, Eugene-Richard Gasana, said the events were meant to “remember a million souls, slain during hundred days of horror, for the only crime of being born Tutsi.”

“We remember brave women and men, who were massacred for upholding the dignity of mankind, by protecting the oppressed and opposing evil,” he added.

Besides the usual 100-day mourning period from May to July, this years’ anniversary also includes a flame of remembrance, which is reportedly currently on a tour of the 30 districts of Rwanda.

The arrival of the torch back in Kigali on April 7th will mark the commencement of the official mourning period of this years anniversary dubbed ‘Kwibuka 20.’

United Nations Secretary General, Ban Ki Moon, who was present at the ceremony in New York said “We draw inspiration from the ability of the Rwandan people to unite and show that reconciliation is possible even after a tragedy of such monumental proportions.”

In 1994, the assassination of President Juvenal Habyarimana of Rwanda and President Cyprien Ntaryamira of Burundi in Kigali sparked off a violent reprisal from the country’s Hutu population.

An estimated 800,000 Tutsis and some Hutus were killed in 100 days as a loosely connected Hutu militia backed by national security agencies rampageously sought Tutsis nationwide.

Despite widespread reports of the ethnic conflict, the international community failed to take action in time to prevent the genocide.

Reports have emerged that the UN gathered intelligence of the impending clashes, but did nothing to prevent it. Critics have also noted that UN peacekeepers in Rwanda failed to prevent the mass murder of civilians.

Mr Ban has noted that “The Rwandan genocide was an epic failure of the international community to take action in the face of atrocious crimes.”

He added that “We have learned important lessons. We know more keenly than ever that genocide is not a single event but a process that evolves over time, and requires planning and resources to carry out.”

Mr. Ban drew an analogy between Rwanda in 1994 and Syria today. According to him, “our collective failure to prevent atrocities in Syria over the past three years is a shameful indictment of the international community.”

He further decried reports of the marginalisation of some people based on their religion and ethnicity. According to him, “We must speak out forcefully whenever communities are threatened by mass atrocities or their precursors.”

Mr. Ban noted that the UN has learnt from its mistakes in Rwanda and has developed preventive mechanisms to avert a recurrence of the horrible clashes in 1994.

Rwandan officials have appealed for international aid for survivors of the genocide and their relatives. Reports indicate many lack of them lack proper housing, education and healthcare.

Several victims and relatives of victims of the genocide have expressed frustration over the fact that many perpetrators of the violent episode have not been tried.

Although some of the leaders of the genocide have been apprehended and tried, many of them are believed to be hiding in France and the Republic of Congo – where they continue to evade the reach of the law.

Photo by Kwibuka.rw: The flame of remembrance in procession.