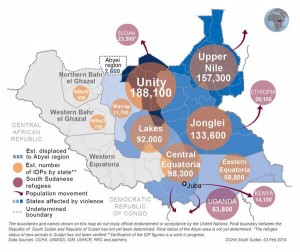 The Minister of Information of South Sudan, Michael Makuei Lueth, has censured the Inter-governmental Agency for Development’s (IGAD) decision to dispatch an advance team of its Joint Technical Committee to the destabilised nation on Sunday.

According to him, the team “arrived in Juba without any official communication to the government of South Sudan from the IGAD.”

Despite the ceasefire agreement between the warring factions in South Sudan, isolated incidents of violent outbursts have been reported in several states across the nation.

Both sides continue to trade blame for initiating the attacks and this reportedly prompted IGAD to deploy the team in advance.

Reports indicate that the 14-member group, made up of military veterans and civilians from across the region, met with several representatives of both sides of the divide and surveyed different parts of the war-torn nation during their 5-day visit, which ended on Friday.

It is currently unclear what conclusions the team has reached concerning the humanitarian situation in South Sudan and the state of the ceasefire agreement.

Officials had disclosed that this preliminary visit is to enable IGAD complete its plans of deploying its main ceasefire monitoring and verification team.

But South Sudan’s Information Minister says the negotiating body got the procedure wrong. According to him, “the Joint Technical Committee (JTC) should have been formed first before IGAD could send in the monitors.”

Meanwhile, peace talks between the warring factions are scheduled to re-commence in Addis Ababa on Monday, Feb. 10th, according to a statement by IGAD on Thursday.

Besides accusations that the South Sudanese army has attacked several rebel positions in at least three states since the ceasefire deal was signed over two weeks ago. The rebels’ representative delegation is also likely to trumpet accusations that the government is recruiting mercenaries from Sudan, who along with the Uganda People’s Defense Force (UPDF), have laid siege on many rebel positions.

On his part, President Yoweri Musuveni of Uganda has reiterated his intention to keep his forces in South Sudan until stability is guaranteed.

Violence erupted in the capital of South Sudan in mid-December and quickly spread across five states of the largely impoverished nation.

The United Nations has disclosed that it is in need of about $1.02 billion to provide medical and other humanitarian services to nearly one million civilians scattered across the young nation.

The organization says it has successfully delivered supplies to about 300,000 civilians. However, officials say this is only a fraction of the 7 million people estimated to be in dire need of supplies, many of whom are reportedly hiding in the bush – making it difficult to reach them.

UN medics have remarked that there is likely to be an outbreak of diseases in crowded refugee camps across the country, especially as clean water supply is reducing.

In response to this threat, Hon Dr. Riek Gai Kok, the Minister of Health of South Sudan, on Friday told Eye Radio Juba that anti-malarial drugs have been dispatched to ten states across the nation.

Reports have emerged that despite the ceasefire, aid cannot be delivered to thousands of civilians in some of the regions worst affected by the fighting.

In Malakal, the UN on Friday disclosed that it has been able to deliver supplies to civilians outside its base for the first time.

Meanwhile, President Salva Kiir of South Sudan has commented that the seven ex-state employees released to Kenya on bail can be made to stand trial in South Sudan if they are found guilty.

This declaration comes after officials noted that the four remaining ex-state employees in custody, along with Riek Machar, Taban Deng Gai and Alfred Lado Gore will stand trial for treason.

Riek Machar recently told the VOA that he and the others “were now an organized resistance against the regime.” He noted that the motives behind the resistance is the creation of a free, democratic South Sudan.

Many observers have speculated that one of the objectives of the insurrection will be to reduce President Kiir’s support base and enable Mr. Machar build one before the country’s 2015 elections, which both men are expected to contest in.

Photo by the United Nations Office for the Coordination of Humanitarian Affairs (UNOCHA) in South Sudan.