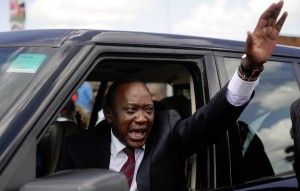 The International Criminal Court’s (ICC) trial of Kenya’s President Uhuru Kenyatta has been postponed to early next year after an admission by the Prosecution that more time was needed for proper preparation.

President Uhuru is expected to be at The Hague on the 5th of February when his trial resumes.

The postponement comes as a delegation from the African Union and a delegation of Kenyan officials are visiting the United Nations Security Council in New York – in a bid to pressurize the council to order the ICC to postpone the trial of Kenya’s leaders or transfer the case to a court closer to Kenya.

However, on Monday, chief prosecutor Fatou Bensouda said although she could begin the case on the 12th, with seven of the total nine witnesses she has, she could not guarantee she can present her case in a “logical and coherent sequence.”

ICC Judges in a statement said “The Chamber deeply regrets that repeated adjournments of the trial have been necessary because one or both parties have required more time to prepare. The Chamber urges both parties to accelerate their preparation in order to ensure that no further postponements are required.”

This is the second time the case, which was set to begin in July this year, is being postponed.

The African Union have highlighted on the trial of Kenyatta as a case-in-point to prove the ICC’s supposed unfairness towards Africans. The Hague-based court is accused of being a colonial tool used to target Africans.

The African Union had asked both President Uhuru Kenyatta and his Deputy William Ruto to stop attending their trails at the Hague until a decision is reached by United Nation’s Security Council (UNSC). However, Vice President Ruto has continued to attend his trial since the directive was issued and President Kenyatta has said he will continue to co-operate with the court.

The United Nations Security council is yet to discuss the petition put forth by the AU and the Kenyan delegation. Despite claims that the petition is due to be tabled at a closed door session of the UNSC’s 15 member council next week, an unidentified insider says the discussion is likely to be postponed to sometime later in the month as the council has a long list of issues to deal with. However, experts say it is unlikely the request will get enough votes when it is discussed.

Meanwhile, the legal representative of the victims, Fregal Gaynor, has decried the postponement of the trial. He said the news will bring his clients “deep disappointment and frustration.”