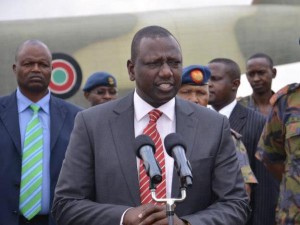 Appeal Judges at the International Criminal Court say Kenyan Deputy President William Ruto must physically attend most of his trial at the Hague and may be excused only under “exceptional circumstances.”

ICC President Sang Hyun-Song reiterated that “The absence of an accused can only take place under exceptional circumstances and must not become the rule.”

This ruling comes as the Kenyan government with the support of the African Union (AU) are demanding that the trials of Kenya’s leaders cease, be postponed or moved to a court close to Kenya.

Trial Judges at the Hague had granted Ruto’s legal team’s request that he be allowed to miss most of his trial at the Hague in order to attend to national duties. However, this decision was reversed after the prosecution took the case to the Appeal Judges.

This move by the ICC is likely to have an effect on the relationship between the ICC and Africa. Last Friday, President Kenyatta was excused from physically attendeding most of his trial at the Hague in order to attend to national duties. Many observers say the prosecution is likely to use this instance as a case-in-point, when (or if) they appeal the decision granting President Kenyatta absence from the Hague.

President Kenyatta, his deputy Ruto and Arap Sang, a journalist, are on trial at the Hague for their involvement in an outbreak of violence at the Rift Valley region of Kenya during the 2007/08 Presidential elections dispute which left  close to 1,100 people dead and about 600,000 displaced.

Ruto had been granted a break to attend to the fall-out of the Westgate attack, but has since resumed his trial at the Hague.