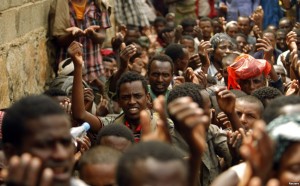 The Ethiopian government has placed a temporary ban on its citizens from travelling overseas in search of employment.

This ban comes as hundreds of Ethiopian migrants continue to lose their lives as they try to illegally get into Arab, Asian and European countries. A large percentage of Ethiopian migrants who are able to successfully enter into these countries are subjected to forms of servitude in the hands of their traffickers.

The government has also provisionally withdrawn the working permits of agencies facilitating these trips.

According to the Ethiopian Ministry of Foreign Affairs, the bans were effected in consideration of the fact that numerous Ethiopians continue to lose their lives and go through untold mental and physical trauma as a result of human trafficking.

The Ministry says although the government has taken some measures to keep the situation under control, these efforts have not been very effective.

According to the authorities, the ban will be in place until the government finds a “lasting solution” to the situation.

There are reports that the Ethiopian government has also specifically placed a six month ban on its citizens from travelling to Saudi Arabia in search of employment.

President Hailemariam Desalegn says the ban is being effected because the working conditions of Ethiopians in Saudi Arabia has steadily worsened.