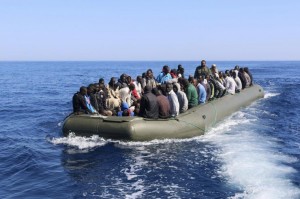 Thousands of Ethiopian and Somali migrants continue traveling to Yemen via rickety boats despite the ongoing conflict in the country.

The Office of the United Nations High Commissioner for Refugees (UNHCR) has warned of the dangers migrants face on the journey across the Arabian Sea and in war-torn Yemen.

Despite the dangers, the number of migrants arriving in Yemen is at a record high. According to the UNHCR, 92,446 people arrived in Yemen last year. The figure is the highest in the past decade.

Nearly 90 percent – 82,268 – of migrants who arrived in Yemen via boats were from Ethiopia. The others are of Somali decent.

2015 was the second most fatal year for African migrants – about 95 migrants drowned while heading to Yemen. The tragic situation shows no signs of abating as 36 migrants drown at sea on Jan. 8. The incident happened after a boat carrying 106 people encountered problems. About 70 people survived the tragic incident, which has sadly become a common occurrence along that route.

Officials have warned about the dangers of traveling to Yemen as a route to Saudi Arabia and other Gulf countries. However, reports indicate that migrants are either uninformed about the severity of the conflict in Yemen or they have been deceived by rumor-spreading gangs and smugglers who operate along the coast of the Red Sea.

“UNHCR and partners in the Horn of Africa counsel would-be crossers about the inherent dangers of the journey, the realities of the situation on the ground in Yemen and the asylum and assistance options available to them,” Edwards said.

African migrants have been trapped and many killed in the Yemen conflict which began in March 2015. Besides fearing for their lives, newly arrived migrants are faced with very limited job opportunities and services.

UNHCR reports that about 2.5 million Yemenis have been internally displaced by the ongoing conflict.

Yemen currently hosts about 266,000 refugees — of which 250 are Somali. About 168,000 of these refugees have reportedly fled from Yemen since the conflict began.