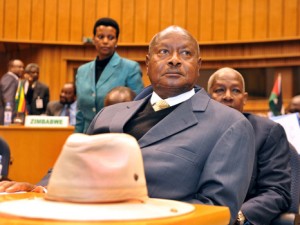 Burundi’s rival sects resumed peace talks in Uganda on Monday amid fears of a return to civil war after months of widespread violence.

Representatives of President Pierre Nkurunziza, whose decision to run for a third term in April sparked unrest in the country, were present at the talks. Members of the opposition were also present at the negotiation, which was chaired by Uganda’s President Yoweri Museveni.

“I really appeal to you, the two sides, to sit down and have a political solution so that you save the people from suffering,” Museveni said at the opening of the talks held in Entebbe, close to the nation’s capital Kampala. “You have no excuse not sit down and quickly resolve…these are clear things, you can meet one afternoon and agree”.

The rival factions are expected to meet again next month in Arusha, northern Tanzania for more negotiations.

Human right activists, religious leaders and members of the opposition regarded as “terrorists” by Burundi’s government were present at the talks.

CNARED, a coalition claiming to uphold the Arusha peace agreement which they claim Nkurunziza’s third term violates, were present at the talks.

The Arusha agreement was signed in 2006 and brought an end to more than a decade of civil war in Burundi.

“CNARED requires above all an immediate end to the massacres, because we cannot negotiate while people are about to be killed,” CNARED spokesman Pancrace Cimpaye said.

CNARED also called for the “immediate deployment” of an African Union (AU) peace keeping troops to Burundi. But Bujumbura has described the move as an “invasion.”

The AU has called on Burundian government to accept a 5,000-strong peacekeeping force aimed to halt months of violence. Hundreds have reportedly fled the violence which has already claimed several lives.

The European Union and other international organizations have condemned the violence and called for dialogue to end the dialogue.

AU Commission Chief Nkosazana Dlamini-Zuma said last week that she had written to Nkurunziza to “seek the consent of the Burundian government for the early deployment” of the peacekeeping force.

“[The] AU has no other agenda than to assist the government and people of Burundi at their hour of need,” Dlamini-Zuma stressed.

Her statements come after Burundians demonstrated against the AU’s decision to deployment the peacekeeping troops to the country. Saturday protests was led by Vice President Gaston Sindimwo, who stressed that Burundi’s army can handle the violence without foreign troops.

“Today, Burundi is at the crossroads; both the leaders and people of Burundi will invest in the peace, security, stability and prosperity that they so richly deserve, or with their eyes firmly fixed on the rear driving mirror they will continue to hurtle towards violence, political intolerance and possible civil war,” said Richard Sezibera, secretary general of the East African Community (EAC) bloc.