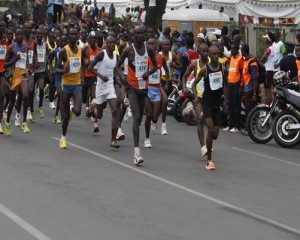 A 28-year-old Kenyan man, who claims he came second place in a marathon held in Nairobi over the weekend, has been arrested for fraud after officials discovered he cheated.

The culprit Julius Njogu finished second place in the Standard Chartered Marathon on Sunday after sprinting past another runner. He was all set to win Sh650,000 ($7,000) in prize money before organizers discovered he cheated.

Organizers of the event, which attracted over 16,000 athletes, said they became suspicious of Njogu because he showed no signs of being tired after supposedly running for 42 kilometers.

Njogu insisted that he had participated in the marathon from the first whistle. However, officials discovered that he joined the race toward the end. According to the organizers, the athlete, who pulled his shoes to show officials blisters on his feet in a bid to convince them that he was in the race from the start, actually ran less than 2 kilometers. He allegedly hid among spectators and joined the leading group of runners.

“I’m second. I didn’t cheat since I followed the course unless there was another. I have trained for this marathon and I’m disappointed I’m not recognized,” Njogu said.

Preliminary investigations reveal that Njogu jogged past Shadrack Kiptoo, the runner who was in second place. CCTV footage has confirmed that Njogu was not part of the leading group of runners at different stages of the marathon.

“I followed the leading team from start to finish and I didn’t see him,” said Ibrahim Hussein, race director and former Boston and New York Marathon champion. “He will not be recognized and I’m so disappointed that one can cheat in this modern age. He didn’t finish second.”

Hussein said it was unfortunate that athletes would resort to cheating. He called on officials to punish Njogu to serve as a deterrent to others considering cheating.

“We need to make him an example and its something which we as the federation must look into very seriously because it means those that have trained hard are locked out of winning by such characters,” he said.

The Standard Chartered Nairobi Marathon is the largest in Kenya. In the past other athletes have tried to cheat their way to the top in the same competition. In 2013, two runners, who claimed to win the women competition, were outed as frauds.

Joshua Kipkorir won the men’s race in two hours, 13 minutes and 25 seconds. While Shadrack Kiptoo was in second place before Njogu breezed past him. It’s not clear if officials have recognized as the legitimate second place winner.

It’s not clear what disciplinary action the federation has decided to take against Njogu.