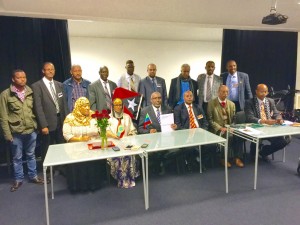 A newly formed Ethiopian opposition group in exile, which accuses Prime Minister Hailemariam Desalegn’s administration and the leading party of being repressive, has vowed to ‘dismantle’ the incumbent government and create a new political order.

A statement released by the Alliance after a meeting on Friday in Oslo, Norway, said it will work to oust the incumbent Ethiopian People’s Revolutionary Democratic Front (EPRDF).

“The (alliance) will create an opportunity for all people in Ethiopia to co-create a transitional political order that is based on the consent of all peoples, where the outmoded hegemonic culture of a single group dominating the rest is dismantled and a new just political order is established, where the respect of the right to self-determination is genuinely granted to all,” the statement said. “PAFD call upon all peoples in Ethiopia to join the alliance and support it in order to end the suffering and dehumanization of all peoples in Ethiopia by the current government. PAFD call upon the regional and international communities, to play a positive role in diffusing this looming danger by supporting the peoples in Ethiopia rather than the illegitimate government before it is too late.”

The group said it “will conduct diplomatic, advocacy, information and other campaigns to change the current undemocratic political culture and oppressive system in Ethiopia.”

The EPRDF, which was itself formed from a coalition of four Ethiopia political parties, came into power in 1991 after ousting the Derg. Despite its economic achievements, the party has been accused of several human rights violations.

The EPRDF recently came under heavy criticisms when it historically claimed 100 percent of the votes in a parliamentary election. In May, the party won 546 of the 547 available seats in parliament.

Human rights groups have accused the government of jailing political opponents. The government has also been criticized for ‘routinely using anti-terror laws to silence its critics’. Several opposition groups have been classed as terrorist organizations by the EPRDF.

Besides Eritrea, Ethiopia is the second country where journalists are imprisoned the most. Bloggers, journalists and political opponents have been found guilty of terrorism charges and sentenced to years in prison or to death. Several opposition members are currently living in exile and many have been sentenced to death in absentia. Although international human rights groups have condemned these trials as lacking due process, the government claims the verdicts were pronounced according to the country’s laws.

Ahead of President Obama’s recent visit to East Africa, Desalegn defended his government’s stand on jailing journalists saying that the country needs “ethical journalism” not those that work with “terrorist groups”.

The Alliance is not the first exiled Ethiopian opposition group that has mounted a campaign to oust the EPRDF. In July, the Ginbot 7 Movement for Unity and Democracy, which has been branded as a terrorist group by Ethiopian authorities, decided to use armed resistance against the government.

The announcement came after the group’s leader Berhanu Nega travelled from the US, where he has been in exile, to Eritrea in order to oversee the campaign.

“We are always open to possibilities of a peaceful resolution. The group emerged from a peaceful movement but now we are forced to consider armed resistance. It is not our choice but there is no other feasible option to challenge the government in Addis Ababa,” a spokesman for the group Dr. Tadesse Biru explained.

The Ethiopian government has not released any statement regarding the newly formed ‘Alliance’ and the group’s motives.