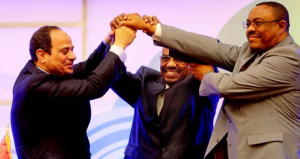 Ethiopia, Egypt and Sudan have signed what they called the ‘Declaration of Principles” to solve a simmering dispute over the building of the Great Ethiopian Renaissance Dam (GERD) by Ethiopia.  Although a lot remains to be seen at the level of technical details, the approach followed by the three countries to engage in a negotiated resolution of the dispute is in line with much needed civilized discourse and is highly commendable. Rants like by the previous Egyptian leader’s, Mr. Morse’s, that Egypt will trade a drop of blood for every drop of its Nile water is insane. I am happy that guy is gone hopefully along with his crazy ideas. Times have changed and Egypt cannot war its way to stopping Ethiopia from using its share of the water on the Nile and secure its interests. The acknowledgment by the current leaders of Egypt that old ways and obsolete treaties will not govern current and future water distribution from the Nile is a big step forward into civilization.

I have observed a barrage of criticisms of this Declaration by several Ethiopians some of whom called it a total give away by Ethiopia. Government officials and their supporters on the other hand, lauded the agreement and are trying to sell it as a big achievement for Ethiopia. There is also a serious debate among experts and politicians in Egypt over the implications of the agreement. Some Egyptians claim Egypt is the victor while other say it is a complete looser in the agreement (See here).  In my view, Ethiopians who criticized this declaration as an Ethiopian give away and supporters and officials of the government who call it an Ethiopian victory have arrived at hasty conclusions.  First of all, the agreement is only a framework for dealing with contentious issues and far from a done deal.  It contains only a set of general and broad guidelines most of which can be interpreted variably by each side in the agreement. For example, statements like ‘causing significant damage” can be interpreted by each party differently.  When do we say a significant damage has occurred and who determines a damage as significant?  The devil is sitting in the technical, scientific and legal details that are to come as the dam building and next step negotiations progress. Potential problems can be expected from the recommendations of the tripartite council that the three countries are going to set up to help them deal with technical matters. That is where our eyes should focus.    Understandably, many Ethiopians do not trust their government on preserving the national interest and have good reasons for their suspicion. The government’s records on the Algiers Agreement following the Ethio-Eritrean war and more recent agreements to cede land to the Sudanese government on the basis of dubious justifications, have created a widespread suspicion that the Ethiopian officials could not mind ceding vital Ethiopian national interests for political expediency. But criticisms should be based on clear understanding of the legal and technical meanings of the agreement than suspicion. Criticisms like the one by Dr. Aklog Birrarra who claims that the agreement is a diplomatic coup for Egypt (See here) is a stretch and exaggeration as much as the claims by those on the side of the government who shamelessly claim it is a winning achievement for Ethiopia (See here).  This is the time for cautious and sober analysis of potential problems by people who understand the technical, scientific, engineering and legal problems that the current broad agreement does and does not address.  We need information from experts who can educate us on potential disadvantages and advantages associated with any agreements for Ethiopia. My personal observation is that the potential for quarrel and confrontation is not avoided at this stage of the agreement.  Given the zeal and determination of Egyptians not to see even a considerable decrease in their share of the water, it will be foolish to rule out serious disagreements in the not distant future.  We will be better served if we understand that this  is not going to be a smooth ride. Ethiopian officials will be doing a great harm by over selling this agreement. They will have to eat their words if the agreement falters and confrontations ensue.

I believe we Ethiopians need to evaluate and discuss this agreement and subsequent technical agreements outside of our political views. We have to understand that the leaders of our country, whether we like them or not, are going to make a historic and binding agreement with long-term, even permanent, consequences for Ethiopia. Even if we suspect them of loving their power more than the national interest, we may have to do everything possible to push them to do the right thing by staking their decision to the political risk they will be taking and their accountability to history.  Good faith analysis, appropriate criticisms and suggestions by experts are needed at this stage to help the public understand the consequences of this declaration as well as subsequent agreements.

As I said above, most of the devil is in the technical and scientific details. This does not however mean that there are no valid questions to be raised even at this stage. There are some glaring areas the Ethiopian negotiators seem to have missed opportunities to put phraseology that show much needed  emphasis for Ethiopia. A closer look at this Declaration shows that a lot of the burden of making sure that there is a sustained flow of Nile waters to Egypt and Sudan is put on Ethiopia’s shoulders.  Since the source of the water is Ethiopia, this may not be surprising on the face of it.  But if there is a scarcity of water in the future as global trends show, how do the three countries share the scarcity? Say, for example, if subsequent years of drought on the Nile basin yield very little water, who has to suffer the most? Or do we take the suffering equally?  What is going to happen to water scarcity which is bound to occur with the rise in population in all three countries, all of which expect a doubling in about 25 years? How is the population of Ethiopia living in the vast Nile basin going to use its share of the water for irrigation? Recent observations of the shrinking of some rift valley lakes of Ethiopia are good indicators that water from the highlands flowing into these lakes is decreasing progressively. This will not be different for the GERD reservoir. This has huge implications for sustaining an agreement that guarantees a flow without considerable harm to the downstream countries.  In my view, the assumption that Egypt and Sudan will get a sustained water flow and live without considerable loss and harm is a false and dangerous promise. The so called significant damage could occur because of natural causes. The agreement is silent on the question of how these kinds of issue are going to be handled.

What the Ethiopian side also missed in the current Declaration of Principles is a clear enunciation that emphasizes water conservation and modernized economic use of water by downstream countries. We know there is huge water wastage in downstream countries that this Declaration should have addressed as unacceptable. Egyptians have been spoiled to levels of laziness when it comes to water wastage. Ethiopia also could have been within its rights to demand that it be consulted before Egypt and Sudan embark on construction of new water projects such as the construction of canals or dams and all attempts to transport water to develop their desert areas. Operations like the Toshka Canal in Egypt, formations of endorheic lakes in the Sahara Desert of Egypt and issues of control of evaporation should have been raised as serious concerns when stating the Declaration.  Ethiopia cannot look at this like, once water gets out of Ethiopia, the downstream countries can do anything they want.  In Egypt alone, as much as 10% of the water is lost through evaporation. A large amount is also lost through wastage and seepage in the network of irrigation canals. If Ethiopia is to be liable to significant damage because of water shortage, she can also demand that downstream countries use pipes to transport water for irrigation instead of open canals that expose the water to huge evaporation in a desert climate.  We have to be aware that global climate change trends show that the future is fraught with a lot of water shortage that could perhaps lead to serious confrontations among countries that share the same river basins and this cannot leave us alone.  Can’t Ethiopia also raise about the alternatives to the Nile? Egypt, for example, has a huge underground water in the Nubian Desert that is probably more than what the Nile water can provide them for centuries. Desalinations of sea water are also big alternatives for Egypt. When Egyptians demand to get an optimal amount of water from the Blue Nile, can’t Ethiopia tell the Egyptians to also make an optimal use of their other water sources?  Another practical question is why is Ethiopia not asking compensation for the time that it extends to fill up the dam and the opportunity costs it incurs. Ethiopia will be having that all the problems of big dams that we have seen around the world. If it gets loose on its agreements, it will be frequently dragged to answer more questions than it can answer.

On Ethiopia’s side it is true that we have a series of important unanswered questions at this stage. Some may be answered at technical agreement levels.  Wholesale criticism and blanket support of the current Declaration of Principles are foolish exercises because they are less likely to change the reality.  Ethiopia’s national interest would be served better if we all take this thing out of the political football and educate the public and ourselves as to the gains and losses that come with any agreement with basin countries. There is a serious need for knowledge regarding the technical and legal issues surrounding the agreements. Then if we oppose or agree any of the decisions it will be because of knowledge we have about the significance of the problem rather than the politics of it.

One last question to the Ethiopian government – why are we not getting an official Amharic translation of the Declaration? Why don’t we hear experts rather than politicians analyze the agreement in language that the public understands? They are doing it in Egypt, why can’t we?

(The writer can be reached at [email protected])