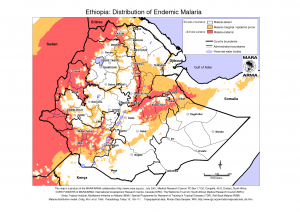 There are two ways to predict a disease outbreak. Health officials can track the number of cases being reported by hospitals and react after numbers spike. Or, scientists can use environmental precursors of a disease to create an early warning system.

The new system, EPIDEMIA, combines both techniques in a user-friendly interface. The team presented their new project Tuesday afternoon at the American Geophysical Union’s Fall Meeting in San Francisco.

The team focused their project in the Amhara region of Ethiopia where regional malaria outbreaks occur every five to eight years and localized, smaller outbreaks spring up more frequently. Sixty-eight percent of the 17 million people in Amhara live in areas where malaria can occur. Spread by mosquitoes, malaria causes chills, fever and flu-like symptoms, and can cause death in severe cases. […] READ MORE