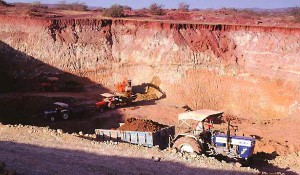 Ethiopia’s significant mineral commodities include tantalum (a corrosion resistant metal used in alloys and electronics), potash (a potassium salt, the source of the ‘K’ part of NPK fertilizers), and gold. Although gold exports alone were worth US$456 million last year mining still contributes less than 2% to Ethiopia’s national economy.

Growing the mining industry is a national priority. The Ethiopian Ministry of Mines envisions a tenfold increase in foreign earnings over the next decade as part of the federal government’s plan for Ethiopia to become a middle income country by 2025. This article looks at efforts underway to investigate how industrial minerals, in particular bentonite, can be part of the mix to attain sustainable social and economic development in Ethiopia.

For geologists, bentonite is the name given to deposits consisting of minerals of the smectite clay group. By definition, clays are extremely fine-grained and at the microscopic level made up of flat or layered shaped minerals. The peculiar way smectite’s chemical compounds are stacked give the individual crystals a negative charge along the flat surfaces. Electrical neutrality is maintained by cations (positively charged ions) that sit between the layers. The nifty feature is that the cations will exchange with other positively charged ions depending on the chemical setting.

For industrial chemists the interest is in the unique ‘scavenging’ property resulting from the large surface area of cation exchange in smectite clays. Also exciting is its habit of swelling in water giving bentonite an ability to strongly modify the flow behavior of liquids. These unique properties open up an impressive range of industrial applications for both the ‘scavenging’ and ‘swelling’ forms of bentonite. Oil drillers add bentonite to their drilling liquid to prevent blowouts, wearers of cosmetics will find it as a base to mascara, the mud in a ‘facial’ is typically bentonite, others swear to the internal cleansing power from eating calcium bentonite, and cats too will find it in their kitty-litter.

Ethiopia’s unique geological setting sitting astride the northern end of Africa’s Great Rift Valley has not only given rise to its coffee-hosting tropical highlands but also to these valuable clay deposits. Bentonites here formed by the chemical alteration of volcanic ash in the presence of water such as in a lake. Such a unique volcanic setting has been provided by the spreading of tectonic plates along the East African Rift. Deposits are found in Afar in the north and in southern Ethiopia as well. […] READ MORE