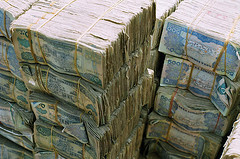 (The East African) – East African economies are feeling the pinch of inflation as their currencies continues to weaken against the dollar.

Uganda and Rwanda managed to ensure the inflation rate remained below 5 per cent. Rwanda’s inflation for August was at 0.9 per cent, the region’s lowest, having dropped from July’s 1.9 percentage.

Inflation rate in Uganda fell to 2.8 per cent in the year to August from 4.3 per cent in July while core inflation, which excludes prices of food, fuel and utilities, inched up to 3.1 per cent during the same period from three per cent in July.

Aly Khan Satchu, a financial market analyst says that so far the Kenyan shilling has lost 2.2 per cent points to the dollar this year.

“We do not expect the currency to depreciate as much as other currencies within the region but we expect the weakening to hold given the expected increase in currency demands as we approach the tourism season. We have also seen the Central Bank willing to intervene in the market and support the situation if needs be,” says Mr Satchu.

The Kenya National Bureau of Statistics blames the inflation uptick on a 0.50 per cent increase in the food and non-alcoholic drinks index, which accounts for just over a third of the basket of goods used to measure inflation.

Last week, most commercial banks quoted the Kenya shilling at 88.30 to the dollar, down from a close of 88.05 the previous week.

Bank of Uganda has kept its main lending rate at 11 per cent, noting that inflation was within its target and the economy was on track to grow six per cent in 2014.

Despite the negative inflation, Uganda’s central bank has intervened three times this month to support the shilling. Bank of Uganda started selling dollars in early trade after the shilling dropped to 2,655/2,665, the weakest level since February 2013.

By Friday last week, it had strengthened to 2,650/2,660, where it had closed on Tuesday. The pressure has been attributed to the demand for the dollar by oil companies, importers and the energy companies. The shilling has weakened about 5 per cent against the dollar this year.

Ephraim Kwesigabo, director of the Tanzania National Bureau of Statistics, while releasing the August inflation results indicated that the increase was as a result of demand of non-food items.

Mr Kwesigabo said that month on month inflation rose 0.1 per cent in August, the same rate that it rose in the previous month.

In April Tanzania Central Bank Governor Prof Benno Ndulu said that the expected increase of food prices in the East Africa region may pose risk to inflation within Tanzania.

“We have managed to keep inflation at single digits during the year due to continued implementation of prudent monetary and fiscal policies. Given projected softening of world oil prices and food prices in the SADC region, single-digit inflation is expected to remain,” Professor Ndulu said.

The weakening of the Tanzanian shilling has been attributed to the easing of the liquidity squeeze on the local currency, which has ushered in a rise of demand for dollars from oil and construction sectors.

The Rwandan franc slightly depreciated by 1.9 per cent against the US dollar due to high demand for foreign exchange to finance imports in the first half of 2014.

“The first half of the year has seen a more less stable exchange rate with a modulate depreciation of 1.9 per cent on the official rate and 2.1 per cent on the market rate. This is linked to an increase in foreign exchange resources to the private sector which increased by 14.8 per cent,” the Governor BNR, John Rwangombwa said.