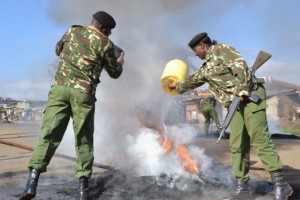 (Nairobi) – Throngs of residents and mutatu drivers from Githurai 45 have lined up along Thika Highway for a second day to protest against the arrest of a police officer.

Constable Titus Musila (popularly known as Katitu) was taken into custody last week Friday after the Director of Public Prosecution, Keriako Tobiko, secured a warrant for his arrest.

Local sources say the police were compelled to use tear gas and water cannon to disperse the protesters, who effectively paralysed movement on the busy highway for over 5 hours on Tuesday. There are also reports that warning shots were fired into the air.

The protesters are alleged to have attacked the officers by pelting stones at them. They are reported to have also set tyres to burn in the middle of the street to make it impassable for motorists.

According to the protesters, Constable Musila is innocent and his only crime is that he set out to dispatch his duties effectively.

The officer is accused of shooting Kenneth Kimani Mwangi in Githurai last year. Initial reports indicate that the officer suspected Kimani to be part of a group that robbed people in the area.

Some protesters have told the press that Constable Musila has been instrumental in the restoration of peace and safety in Kasarani. An unidentified protester told Daily Nation that the officer is known to “give bus fare to criminals to go back to their villages and stop engaging in crime. He would give them time to change their ways.”

But some pundits have questioned the credentials of the officer, noting that Mwangi’s brother, Oscar Muchoki Mwangi, who was a key witness in the upcoming trial, was also shot and killed a few days after the arrest for Constable Musila was issued.

Additionally, the police were reluctant to release Constable Musila for prosecution for nearly two weeks after he was ordered to be taken into custody; forcing Mr. Tobiko to secure a warrant for his arrest.

Due to these rather strange circumstances surrounding his arrest, local sources say the Independent Policing Oversight Authority (IPOA) has expressed interest in interrogating the officer.

Officials have revealed that the other witnesses in the trial, which is set to be heard on Sept. 16th, have been placed under the protection of the state.

Meanwhile, the protesters have revealed that they intend to continue their demonstration until Constable Musila is freed. According to them, the muders of the Mwangi brothers is vindicated as both men were known to be notorious criminals.

“We want Kitatu back here, he had helped eliminate criminals in the area and was not taking bribes like other officers in Kasarani Division,” one protester only identified as Josiah told the press.

Earlier in the year, mutatu driver in Kasarani took to the streets to protest against extortion and harrasment from officers, which they claim led to the death of one of their colleagues.