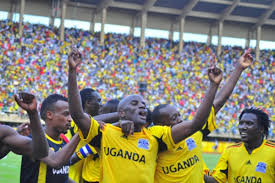 Ghana were forced to come from behind to earn a 1-1 draw with Uganda in their opening Africa Cup of Nations qualifier on Saturday.

After a dismal World Cup, riddled with off-field problems, Kwesi Appiah’s men made an unconvincing start to their qualifying campaign in Kumasi.

Without Sulley Muntari and Kevin-Prince Boateng – suspended indefinitely due to disciplinary problems – the hosts toiled against their opponents, ranked 45 places below them in the world.

After Tony Mawejje had given Uganda the lead at the end of the first half, Ghana were grateful to an award of a controversial penalty which Andre Ayew confidently dispatched as the hosts earned themselves a point.

Ghana made the brighter start, and captain Asamoah Gyan was twice denied by fine saves from Uganda goalkeeper Denis Onyango.

Those stops proved crucial on the stroke of half-time as Mawejje gave the visitors the lead with a shot from the edge of the area that bounced awkwardly in front of Fatau Dauda and flew into the corner.

Ghana reacted strongly at the start of the second half and were level in the 50th minute.

Abdul Majeed Waris was adjudged to have been felled inside the box and after protests from the Uganda players fell on deaf ears, Ayew sent his spot-kick straight down the middle.

Although Ghana had much the better of the final half an hour, Appiah’s men were unable to force a winner and will now travel to Togo for their next Group E qualifier on Wednesday, while Uganda will host Guinea.