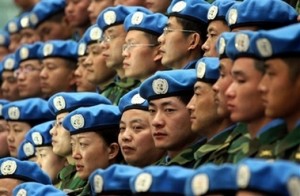 China has agreed to send about 700 combat forces to South Sudan as part of the United Nations peace keeping mission in the country, the government said.

“We will be happy to receive 700 combat troops from the People’s Republic of China as part of UNMISS,” foreign affairs minister, Barnaba Marial Benjamin told reporters Friday.

An economic and technical agreement has already been signed between the two nations, but it remains unclear when these combat forces would arrive in South Sudan.

The UN peacekeeping forces were deployed in South Sudan in 2005 to monitor implementation of Comprehensive Peace Agreement (CPA) that ended over two decades of the north-south Sudan civil war. Its mandate was, however, renewed in 2011 to focus on civilian protection and assist the young nation in institutional building.

Thousands have been killed and over a million displaced by the conflict that erupted in Juba late last year between soldiers loyal to President Salva Kiir and his former deputy Riek Machar. Currently, over100,000 civilians are sheltering at UN bases across the country.

China, a major investor in South Sudan’s oil, is keen to protect it interest in the country. In June, China attracted international condemnation for supplying Juba with weapons and ammunitions worth millions dollars.

“For the first time in their history China has never sent out combat forces. But for the first time, they are going out 700 combat troops as part of UNMISS in order to engage in enhancing peace in this country, protection of civilians, protection of important infrastructure and enhancing the peace process in as far as South Sudan is concern,” he said.

The UN Security Council (UNSC), in December last year, approved an extra 5, 500 peacekeepers for South Sudan following the violent outbreak of conflict in the country.

The Security Council, in May, approved a resolution extending its South Sudan mission mandate until 30 November and authorised it to use “all necessary means” to protect civilians, monitor and investigate human rights, create the conditions for delivery of humanitarian assistance, and support the implementation of the ceasefire agreement.

The mission, the resolution stated, will remain with the 12,500 troops and 1,323 police forces approved by the Security Council last year.