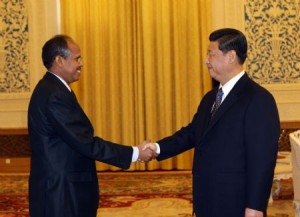 During the meeting, Li said China is willing to support Djibouti’s efforts to build a regional logistics hub, develop a port economy, improve their people’s livelihood and create a peaceful harbor for the region.

Since the forging of diplomatic ties 35 years ago, both countries have always supported and treated each other as equals, he said.

He vowed to enhance win-win cooperation with African countries and bring benefits to the people.

Kamil said Djibouti admires China’s achievements and hopes to learn from the country’s experience while pushing forward bilateral cooperation on all fronts.

Djibouti is ready to utilize its geographical advantage to become a gateway for Chinese products into Africa, said Kamil, expressing his hope for more Chinese investment in the country.

The Youth Olympics, a sporting event for the youth of the world, was proposed by former International Olympic Committee President Jacques Rogge. Singapore held the inaugural Youth Olympics in 2010.