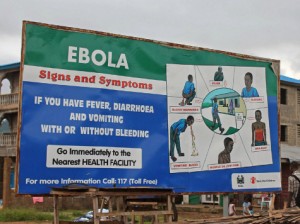 The east African region has been set on its toes following the revelation of an outbreak of Ebola infections in west Africa this March.

This disease, which was first identified in the Democratic Republic of Congo and Sudan in the 70s, has been a recurring scourge in the region.

However, the lastest outbreak in west Africa, where it has never been recorded, is regarded as the worst in history. Over 1,000 people have been reported infected and nearly 700 dead from the virus in Liberia, Sierra Leone and Nigeria. This has forced the World Health Organization (WHO) to designate Ebola an international public health emergency.

According to local sources, the relative inexperience of the local population with this disease and the unpreparedness of health facilities for such an infection has exacerbated its wide diffusion and fatality.

Many west African nations have expressed concerns about a possible spread of this infection into their borders and have set up preventive measure to curb this possibility. In east Africa, where the population and health experts are well acquainted with the disease, the scene is quite similar.

Meanwhile, health experts have raised concerns about the disease resurfacing in the region – particularly in countries like Uganda, DRC and Sudan, where it has a history.

Ebola surveillance and preventive measures
Last week, the Rwandan Health Ministry announced that mobile health centers have been created at all entry points into the country (including the country’s main airport) to screen people. Rwandair employees are also set to be trained on how to deal with infected passengers.

Local sources say health facilities across the country are on high alert for the virus and have expressed confidence in their ability to contain an infection.

In Kenya, officials have also been screening passengers at the Jomo Kenyatta International Airport.

The Director of Medical Services, Dr. Nicholas Muraguri, told the VOA recently that the country has “a contingency plan that’s been coordinated by an Ebola outbreak response team which has a number of sub-committees looking at various aspects.”

He also hailed the preparedness of Kenya Medical Research Foundation (KEMRI) to guide the collection and testing of samples from patients.

The Ethiopian Federal Ministry of Health has also set up its defenses against this scourge. Last week, a workshop was organized by the Ministry in Addis Ababa to educate health workers on the Ebola virus. Reports indicate that more than 200 participants attended the event.

Meanwhile, the Ministry has reportedly also formulated a preparedness plan and equipped a unit of front line health workers with the necessary equipments to respond to an outbreak.

Patients with Ebola symptoms placed in quarantine
At least three people, suspected of being infected with Ebola, have been isolated from the public in three countries in the region in the past few days.

On Sunday, the Rwandan Ministry of Health revealed that a German medical student, who recently returned from Liberia, had been quarantined after reporting symptoms consistent with the deadly disease. Reports indicate that samples have been collected from the patient and transferred to an international laboratory for testing. The results are expected to be released in about 48 hours.

Meanwhile, in a press release on Monday, the Ministry allayed growing concerns after disclosing that the unidentified German national is recovering.

“his temperature has significantly gone down and he is recovering well from malaria and other symptoms,” the press release noted.

The Ministry further announced that other people, who had come in contact with the patient and were resultantly also quarantined, have shown no symptoms of infection.

In Kenya, a Congolese traveler was detained last Friday at the Jomo Kenyatta International Airport after showing signs of Ebola.

However, over the weekend, the Health Ministry announced that tests results have revealed that the 43 year old was only suffering from food poisoning and has been responding well to treatment.

In Uganda, another patient quarantined under the suspicion of being infected with Ebola has been set free after test results revealed that he did not have the disease. Reports indicate that the passenger, who was held up at the Entebbe airport, had been travelling from South Sudan.

This is the second false Ebola infection scare in Uganda since the virus resurfaced in west Africa earlier in the year.

Regional Airlines defy health scare
As fears over the inability of local authorities to contain the virus continues to grow, airline operators have displayed some apprehension about visiting countries that have recorded cases of Ebola.

At least two international airline operators have temporarily stopped flights to some west African destinations recently. The International Air Transport Association (IATA) has however failed to impose any travel restrictions on flights to/from countries affected by the virus.

According to reports, this is partly due to the fact that the disease isn’t airborne. Although the possibility of an infected patient travelling by plane and spreading the virus is credited, authorities say it does not warrant a total travel ban. Meanwhile, the World Health Organization (WHO) has published guidelines for airlines to deal with suspected cases of Ebola infection. The International Civil Aviation Organization (ICAO) has reportedly also been collaborating with the IATA to control the spread of the virus.

Kenya Airways has announced that flights to west African destinations will not be stopped due to the outbreak of Ebola.

The company’s CEO, Titus Naikuni, has however revealed that the airline is working closely with the country’s health authorities to monitor the spread of the virus.

Ethiopian Airlines has instituted surveillance and preventive measures against Ebola. In a recent statement, the company noted that “The safety and well-being of our customers and staff always come first…Ethiopian has taken the lead in taking extraordinary precautions in connection with the outbreak of the disease in some parts of West Africa.”

Rwandair has also revealed that flights to affected countries will not be stopped. The company has further disclosed that measures have been put in place to ensure the safety of its passengers and staff.

Reports indicate that the governments of Uganda and Kenya are set to dispatch health experts to assist west African nations contain the widespread Ebola infection.