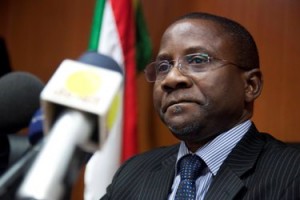 An independent United Nations human rights expert, Mashood Banderin, has arrived in Sudan for a ten-day visit to assess the country’s credential’s against the organization’s standards.

Mr. Banderin has revealed that during this visit he will focus on the situation in South Kordofan and Blue Nile States.

Hundreds of people have been killed and thousands forced to flee their homes as a result of clashes between government and rebels in Darfur, South Kordofan and Blue Nile since the beginning of the year.

This weekend, the Sudan People’s Liberation Movement-North (SPLM-N) spokesman for Nuba Mountains, Jatiga Amoga Dahlman, revealed that about 2,153 bombs and missiles have been dropped in 10 villages in South Kordofan in the past two months.

According to him, this has resulted in the deaths of 10 people, while 40 others have sustained injuries. He also noted that about 35,615 people have been displaced from Un Duram.

Reports indicate that these attacks have led to the destruction of several properties, including schools, hospitals, mosques, churches and water installations.

Last week, the United States Ambassador to the United Nations, Samantha Power, who revealed that the Sudanese government has increased its attacks on civilians, noted that about 300,000 people have been displaced from Darfur this year.

The amount of people displaced by the conflict in Blue Nile is unknown. However, Mrs. Power told the press that in total, about 1.3 million people are believed to have been affected by the fighting.

Several opposition groups in the country have charged the United Nations and other human rights advocacy groups of failing to highlight the grave violations of international law by the Sudanese military.

Meanwhile, Justice Minister, Mr. Dousa, has revealed that the Sudanese government is ready to co-operate with the United Nations and implement the recommendations of its council for human rights.

This weekend, Presidential Assistant, Dr. Ibrahim Ghandour, reiterated an invitation to opposition groups in the country to get on board the plan for an all-inclusive national dialogue to end the war and lay the path for the presidential elections in 2015.

According to him, the government is ready to sign a peace deal in South Kordofan and Blue Nile States if the rebels join the dialogue.

Several opposition groups have voiced an unwillingness to participate in the dialogue, which, they say, is only a ruse by the ruling National Congress Party (NCP) to safeguard its position ahead of the next general elections.

Pundits say the government’s arrest of two prominent opposition figures recently may have severely damaged efforts to bridge the gap between the political groups in the country.

Some opposition groups have directed the government to free their incarcerated colleagues and guarantee press and political freedom as a precondition for the talks.

However, Mr. Ghandour has revealed that the government would not allow the opposition’s hesitation to engage in dialogue derail the 2015 national elections.