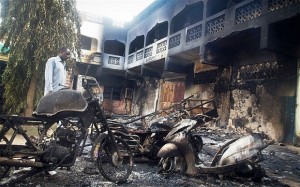 A brazen terrorist raid on a town in the same county as one of the most popular locations among holiday-makers in Mombasa, has left at least 48 people dead, according to the police.

The death toll was revised on Monday morning; after officials reportedly uncovered several bodies in homes and strewn across the streets.

Local sources say the attack, which reportedly lasted up to five hours, commenced after some unidentified men, armed with automatic rifles, hijacked two buses from Witu and steered them towards Mpeketoni, Lamu County.

The gunmen, who allegedly opened fire indiscriminately on everyone they came across, are believed to have been joined by their colleagues in the town.

Eyewitnesses claim the attackers numbered up to fifty. This assertion has been supported by the local police, who say the sheer size of the group overwhelmed the officers who responded to the calls for help. Local sources say one of the casualty is a police officer.

Reports indicate that the attackers first targeted the Mpeketoni Police Station with an explosive and a hail of bullets, before shifting their focus to other locations including hotels, a bank, a fuel station as well as several homes and shops. Many spectators of the World Cup games in pubs and hotel lounges are reported to have been among the casualties.

Deputy District Commissioner, Benson Maisori, has confirmed these reports to the press. He also revealed that several buildings in the town have been burnt.

While the identities of the attackers remains unclear, many accusing fingers have pointed to al Shabab. According to witnesses, the attackers spoke in a Somali dialect and shouted Islamic slogans as is characteristic of al Shabab loyalists.

Since September, the terrorists have embarked on a campaign that has seen several deadly attacks carried out in neighbouring countries – particularly Kenya. Last month, al Shabab commander, Fuad Mohamed Khalaf, told the VOA that the terrorists have trained several Kenyan suicide fighters, who will be sent back to their country to strike.

The Kenyan government’s operation ‘Uslama Watch’, which is aimed at eliminating illegal Somali immigrants, has been widely condemned by many groups, including the terrorists. Some pundits say the attack could be a retaliation for the alleged mistreatment of Somali citizens during the exercise.

Lamu Police Commander, Leonard Omollo, who told the Reuters that all the casualties are males, noted that the attack may have been carried out by other criminals; such as the Mombasa Republican Council (MRC).

Meanwhile, the Inspector General of Police, David Kimaiyo, who described the attack as ‘heinous’, revealed that an investigation has been opened into it.

He noted that security has been intensified and officers are combing the area for more bodies.

According to the BBC, President Uhuru Kenyatta has invited the IGP and the Cabinet Secretary for the Interior Ministry, Ole Lenku, to deliberate on the current security situation.

Reports indicate that an aircraft has been dispatched to support the investigation. The Red Cross have reportedly also arrived at the scene.

Kenya’s tourism industry continues to endure the negative consequences of these rampant terrorist raids. Local sources say tourism figures were sluggish in 2013 and already this year, travel warnings have been issued against the east African nation. Reports indicate that the British Consulate has closed its office in Mombasa. Many tour operators are also reported to have temporarily shut down.

Kenyan officials have urged the government to dedicate more funds and attention to this industry, which accounts for more than 10% of the nation’s annual gross domestic product.